In the Face of Evil...What are You Prepared to Do?

In the 1987 classic mobster movie, The Untouchables, Eliot Ness (played by a very young Kevin Costner) sits in a church cathedral with a sage beat cop named Jim Malone (Sean Connery). Ness wants to catch the notorious but seemingly untouchable mob boss, Al Capone, but he doesn't know how. Capone always seems to be one step ahead. And no matter how hideously evil Capone's acts, nothing seems to stick to him. He always manages to escape. The law can't touch him.

Malone confronts Ness here by saying, "What are you prepared to do?" Enough from me. Watch the clip:


It's a brilliant scene. Powerful, thought-provoking, and a little bit unsettling. In the narrative, Eliot Ness gets the message intellectually but he doesn't quite get it in his heart, in his gut, or in his soul. It takes a mortally wounded Malone, lying in a pool of blood, gasping out the words once more:

"What are you prepared to do?"

...to finally get through to Ness. He gets it, at last. But it took a brutal murder, a face-to-face confrontation with black, soulless evil…to WAKE. HIM. UP.

More than 120 people are murdered by terrorists. Black. Soulless. Evil. This will be for France like September 11th is for us. But here, I need to ask you (in as much as I must ask myself): What are you prepared to do?

How many 9/11s is it going to take? How many school shootings? How many inner city teens dying? How many genocides? HOW MANY? Before Christians will get up off their collective butt and get on their feet and on their knees? 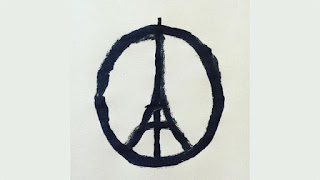 On October 12th of this year, I lost my father. He lived a long, fruitful life and in his 85th year, was definitely beginning to show his age. We knew it was coming in a few years maybe, but when he died, it was still tragic. My whole family went to my parents' house. We got to sit with my father one last time, to say goodbye. I got to hold his hand and caress his gray brow…one last time. But the man I knew as my father was gone. All that remained was his physical body, an inanimate object…a shell.

In Paris today, there are thousands of loved ones struggling to come to grips with an even more tragic and sudden form of death. And millions more, worldwide, will shake their heads and mutter things like, "What is this world coming to?" or "Can't someone stop these terrorists?" or even the most basic question of all, "Why?"

Science can't help you answer these questions. Atheism blinks and hollowly points fingers. In the face of abject evil, moralism and humanism peel away like old paint, exposing the rot underneath.


What are you prepared to do?

Satan, and the fallen third of all the angelic realm—they are the enemy.

The enemy will do anything. He will hit you when you're down. He will exploit your weaknesses. He will destroy the innocent and dance over our grief. He is not playing fair. He is not playing by the rules. He could care less about our human laws, but exists only to strangle our hopes. He is sin. He is despair. He is death.

What are you prepared to do?

No, we don't fight the Chicago way. But we can learn from it. We're not to go all vigilante-style looking for and murdering possible terrorists or evil-doers. Don't you see? That kind of response wouldn't do any good anyway. Our enemy is NOT people. If we burn the puppets, the puppet master simply gets more puppets. We need to attack the enemy. We need to cut the puppet master's strings.

This is a spiritual battle. We access the spirit realm through prayer. But we need to step it up. We need to ask God to send angels to protect us. We need to ask God to drench those grieving with His supernatural peace. But we also need to attack. We need to ask God to send legions of His warrior angels to: slash the enemy's lines of communication, to put the enemy's networks in disarray, and to  crush evil strongholds to rubble. This is not a game. This. Is. War. So, Christian, fight. Pray that God would kick the devil in the teeth and then crush the enemy under our heels. Pray specifically for the terrorists to have their eyes opened to see Jesus and believe. Pray for the terrorists to escape the snare that they are in and turn from their missions of harm, fear, and murder. Pray that ALL false belief systems would burn in the holy light of the One True God.

This is where we really pull a Sean Connery. Love isn't fair at all. Love is beyond law. And we Christians are told:

"But I say to you, love your enemies, bless those who curse you, do good to those who hate you, and pray for those who spitefully use you and persecute you, that you may be sons of your Father in heaven; for He makes His sun rise on the evil and on the good, and sends rain on the just and the unjust. For if you love those who love you, what reward have you? Do not even the tax collectors do the same? … Therefore you shall be perfect, just as your Father in heaven is perfect.” (Matthew 5:44-48)

BAM. Love everyone and everywhere you can. A kind word. A smile. A hug. A hand. A note. A service. Love your brothers and sisters in Christ so that the world may see AT LAST that we are ONE. How do we love our enemies? See prayer. Are there other ways? Ask God to show you.

Love not just in words but in actions. There are going to be collections at Church and elsewhere, collections to help the people of Paris. Give. Maybe take all the money you might have spent at Starbucks and give it to relief agencies to help Paris. (Sorry about the Starbucks jab. I couldn't resist.) If your church puts together a team to travel to Paris...or anywhere else, try to go. Or help support others who can go. And then, not just the occasional effort, but help others all over the place. With every cup of water you deliver in Jesus' name, you rock the spiritual world. You send tremors through the enemy camp. And, you open the eyes of the world.

Our enemy is not flesh and blood. The law of this world can't touch him. We cannot fight conventionally, but we must fight.

There is black, soulless evil in this world. What are you prepared to do to fight it?


Posted by WayneThomasBatson at 12:01 PM 3 comments: