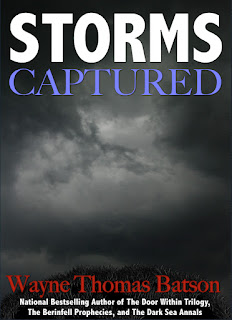 You may not believe this, but LONG before I became a novelist, I was a poet. Yeah, I know, I know... you're probably picturing me in tights with a pluffy shirt and one of those little medieval caps with a feather sticking out of it. That's disturbing. Okay, picture something else please. ;-)

All kidding aside, poetry was probably my favorite form of creative writing for ten years. I started kind of spontaneously in high school. My wonderful English teacher, Mrs. Mangum produced a literary magazine for the school and encouraged a very shy freshman Batson to give poetry a whirl. Turns out, I loved it. Poetry's not big on length, so it didn't take forever to feel like I'd finished something. You could sit down for an hour and pound something out. And I often did.

It became a kind of high school therapy technique. For my younger readers who are still in high school, you know how volatile and troubling the experience can be. So I wrote and wrote and wrote. That's not to say that I wrote well. It was mostly rhyming verse, mostly on whatever made me angry, lovesick, happy, or sad. Often I wrote song lyrics styled after the heavy metal bands I used to listen to. Oh vey, that was some awful stuff. If anyone out there still has a copy of "Byrds in Leather," please burn it. NOW.

But some of it was pretty good…or at least my high school buddies thought so. It was enough for me.

In 1991, I became a Christian. And that really opened the poetic flood gates. I kept a Mead Black&White Composition book with me at all times and wrote all kinds of praise poetry, exploration of Christian life, doubt-filled wonderings, and a great many examinations of the world through my new Christian eyesight. Again, some of it was lousy, but it was honest, and it was a way for me to communicate to God. And, I am convinced, it was also a way for God to communicate to me.

Long about 2002-2003, I took a creative writing course up at McDaniel College (formerly Western Maryland College) in Westminster. The teacher was a published contemporary poet named Kathy Mangan. This class—and this teacher—hit me like a dump truck. She ripped my poetry up one side and down the other. But I didn't care. It was good. It was sooooo good. She taught me all about the power of words—precise, active verbs to drive every line. And each verb could carry with it a feeling or an image. Words could no longer be wasted. Specific concrete nouns, vivid figures of speech, potent words that could lead readers down more than one path. That class was a watershed moment for my writing. Not that I think I'm a great writer or that my prose are superior—no, far from it. Still very much a students. But that class opened my eyes to what my writing could be. And so much of what I learned there went into every novel I write.

So what's up with Captured Storms? It's a collection of some of my poetry over the years. You can tell the pre2002 stuff pretty easily. {Sigh} But in any case, all this work, all the hours and emotion, all the storms weathered and explored—it all sat collecting dust on a shelf. There was no way to publish it. Most traditional publishers just didn't publish poetry. But now, ebooks have made a way. I'm stoked to release Captured Storms today. Here's a little more about the collection:

What are “Captured Storms?” They are electric passions stirred by God. They are heart’s cries from a broken person to a broken world. They are the result of those rare times when we finally—FINALLY—shut up long enough for us to hear God speak…when the cacophony of life can no longer drown out the Holy Spirit’s beautiful melody of truth.

Captured Storms are also autobiographical snapshots of where I’ve been. Some of the verse contained here reveal the joys and trials in those years long ago right after I became a Christian. And still others are simply explorations. Some of them are rough and raw; others more polished and purposeful. You’ll find free verse and rhyme. You’ll find some that seem destined to find music and become a song. And then others that would be utterly ruined by the intrusion of notes.

How should you use Captured Storms? It is a devotional, but not in the traditional sense. There are no study questions. There’s no small group guide. My hope is that you might read with a willingness to let God have His way with you. Perhaps a word or phrase will prompt you to capture your own storms: be honest with the pain, the struggle, the despair—see the darkness for what it is, and then let the blazing Love of Christ kindle a new fire in your heart.


Posted by WayneThomasBatson at 9:22 AM 6 comments: