I grew up in Prince George's County, Maryland. Redskins Territory. My whole family rooted for the Skins in the down years and in the Super Bowl seasons. I bleed Maroon and Gold. If you follow the NFL, you know that the Redskins have suffered through some lousy seasons of late. Well, I think that's about to change. We have football people in charge of the team again. The players are buying in and excited. And the NFL draft is just a month away. For those who don't follow football, the draft is where pro teams pick players who are coming out of college.

I'm no expert, but I've seen so many Mock Drafts this year that I decided to get into the action. I'm only going to tell you who the Redskins will pick, not the other teams. I'm also going to give explanations to provide comedic reading when the draft occurs and everyone realizes just how wrong I was. lol The Skins have only 5 picks this year. But I think they'll make the most of them. They have the following picks:

Here's how I think it will go:


Round 1    4th Pick    4th overall   Redskins Pick: Ndamukong Suh, DT, Nebraska
This is a shocker. Most folks predict Suh will be gone already. Here's my thinking: I suspect the Rams will take Bradford as expected. Detroit will throw everyone a curve by taking studly OT Russell Okung. Tampa will have to choose between two incredible DL prospects. I think they'll take McCoy. The Redskins will then find themselves with a happy problem. They really need offensive line, but with Suh available, they'll take him. Can you imagine the apocalyptic defense the Skins could run if they had Haynesworth and Suh on the D-Line. {Chills} If the Lions don't take Okung, the Redskins have to get him. They really do need someone to protect the QB. If Okung and Suh are gone, I see the Skins taking worldbeater free safety Eric Berry. That way they can move LaRon Landry back to his natural Strong Safety Position.


Round 2    5th Pick    37th overall   Bruce Campbell, OT, Maryland
The Redskins will be shocked to find Campbell hanging around this late in the draft. This former Terp wowed everyone with his athleticism at the NFL Combine, but lots of teams will pass because Campbell is unpolished. The Redskins won't care. This guy is for real and will start at left tackle this year.


Round 3 (In a trade with Tennessee or Atlanta)  Tim Tebow, QB, Florida
The Redskins will trade DE/LB Anthony Carter to Ten or Atl for a 3rd round pick. Those teams could use a pass rusher DE or OLB. With Suh already in the stable, we suddenly have even more DL surplus. Carter is the odd man out. Forget mechanics. Tebow is a winner at QB. The Redskins need a leader at that position and have Campbell for another season, so they won't have to throw Tebow to the wolves right away. Tony Pike is also a possibility here.

Round 5    4th Pick    135th overall    Ben Tate, RB, Auburn
Mike Shanahan has a habit of taking middle to late round RBs and turning them into absolute studs in the pros. Tate is a late bloomer who really hit his stride in his senior year. With Portis and Johnson already on the roster, Shanahan is thinking of the future. And Tate is it.

Round 7    4th Pick    211th overall       Andrew Lewis, OG, Oklahoma State
The final piece to the O-line puzzle. The Redskins like Lewis' size and speed. He might be a project this year, but look for him to develop into a starter in 2011.


Well, there you go. Fantasy author's take on the 2010 Redskins Draft. I don't expect to be right, but I hope I am.
Posted by WayneThomasBatson at 12:43 PM 5 comments: 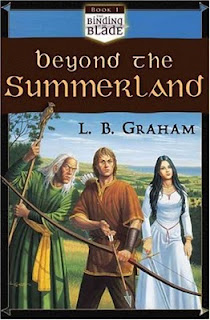 We've been discussing the coming eBook revolution here quite a bit lately. Seems like the market is beginning to explode. This just in from fantastic author LB Graham: He's offering the first book of his epic Binding of the Blade series for just 99 cents. That's .99!  That's like a sixth of a penny per page! Ridiculous! If you have any kind of eReader, go get this now!

When I call LB's work "Epic" please understand, I'm using the word accurately. LB is one of the best world builders I know. Brilliant. Tolkienesque. And don't let the old school cover art fool you. This is a timeless tale. Awesome stuff.


Click here to get Beyond the Summer Land for 99cents!
Posted by WayneThomasBatson at 2:48 PM 9 comments: