Avatar: Forget the Hype. It's better than that. 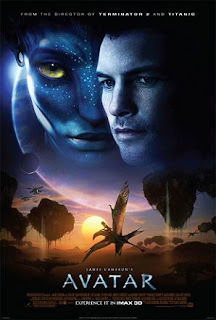 Finally got a chance to see Avatar tonight. Took my two sons with me. And parents, use your own discernment before the Lord as to whether you want to see it or take kids to see it.  But all I can say is: WOW. Seriously, I was absolutely floored by the movie.

I've heard lots of reviews talk about the special effects as if they are worth the price of a ticket, while the story is weak. NONSENSE. The story was brilliantly executed, if not terribly original. It's not like the story of Star Wars was that original either. Hello, Arthurian Legend?

One critical point and then back to raving. Beware, SPOILERS ahead, but I'll try not to ruin the movie for anyone. Ok, so the one hokey thing is that the Na'vi (the blue alien race) have a kind of New Agey/Indian Spirit World kind of religion going on. There are a couple of strange scenes where they all lock arms and kind of sway in a sort of prayer to All Mother (kind of like mother earth). And there's a line or two about us killing our own world's mother. But that's it. Official Disclaimer: there's some seriously foul language from time to time--from the space marines, which makes sense, but nonetheless made me wince a few times.

Effects: This is the first movie I've ever scene where I actually could not tell where the reality began and ended. The CGI is that good. From beads of sweat on a forehead to strands of wheat on a cliffside, to an uncanny look of love in the eyes of Neytiri (female lead), it was all absolutely spectacular. It was all just right. Camera angles, color, action, detail, shadow, movement---just flawless. And the world that Mr. Cameron developed was nothing short of breathtaking. After the movie, my son said to me, "Dad, I want to go back there." I asked what  he meant. "Back into that world," he replied. And you know what? So did I. The coolest thing was that on the drive home, the shared awe of this fantasy world gave rise to a conversation of what Heaven will be like--that it will blow Avatar's world out of the water! We also got to talk about doing heroic things here on earth by serving the Lord. How's that for post movie chit chat? Praise God.

Story: Humans have depleted earth's resources and go looking for more elsewhere. We find it on an alien moon where the Na'vi live. There's a powerful ore beneath the Na'vi's main home and so greedy people want to take it. Sounds like a lot of things, right? Well, not so fast. See Avatar isn't just a cool sounding name. It's the key to it all. Kind of virtual reality taken to a level never before seen. And it leads to all sorts of internal conflicts and passionate themes. I was inspired to love my wife better, to love my family with protective ferocity. There's this one scene I will never forget where Neytiri protects her husband who is wounded, and warding off enemies. After several battles, she crouches over her beloved and turns to face the attacker----WOW!!!  I want someone to love me with that kind of ferocity. I want to love others with that kind of ferocity. Maybe God loves us with that kind of ferocity. He loved us enough to die for us.

Posted by WayneThomasBatson at 10:42 PM 39 comments: