Behind the Scenes Part 2: Drafting

Welcome to Behind the Scenes, Part 2. As you know, Author Christopher Hopper and I are working on a new fantasy series called The Berinfell Prophecies. Book 1: Curse of the Spider King is finished and will be out in stores Oct. 15th, or so I was told most recently. Now, we're working on the second book in the series.

Today, we're going to look into the drafting process. In other words, now that we've got an outline, a blueprint of where we're going with the story, we need to write out our very first draft, the ROUGH draft. I need to emphasize rough because to many would-be authors try to skip steps in the writing process by being too careful during that first draft. We agonize over the right word or right name; we stare at one paragraph trying for the most righteous turn of the phrase; or perhaps we labor over dialogue to get it "just right." Can I lift a burden from your shoulders? Don't do it that way. You will only frustrate yourself and slow yourself down.

For the rough draft, you just need to get those ideas down. Don't worry about spelling, grammar, word choice, colorful verbs, etc. etc. {Gag} Just write. Think of it this way: Suppose you have 2 hours to write today. You can either take your outline and run with it, ignoring the impulse to agonize over "just the right word" and finish two hours later with seven pages of content. OR, you can try to draft, revise, edit, proofread, and redraft--ALL in one step. In the end you will have a beautiful piece of prose...perfect even. But, it'll be one paragraph. Hmmm...

Another thing to think about is the importance of creative momentum. Your mind is a complex thing. Story comes flowing out of it, one thought leading to another and then another. Sometimes, you have to write several pages before something really REALLY cool comes along. Suppose, however, you are stop-start, stop-starting all over the place, trying to make it perfect in one shot...you may never get to that great idea that's lurking around the corner…if you could just get past yourself and get to the next page of content.

For Christopher and I, coauthoring a book means we need to talk logistics: what scene are you going to do? Where do you see that falling in the narrative? See the below capture of our iChat.

Once we've figured out who's writing what scenes, we draft the scenes. Our "system," if you can call it that, is to each write our rough drafts of 2-3 chapters. Then, we send it to the other for revising. We give each other TOTAL permission to make any changes we want--without using the "Track Changes" feature. In this way, we develop "OUR" voice rather than his and mine. After we revise the other's scenes, we send them back to the original author for "final" revisions. During this time, the original author may change some things back or alter things additionally. To us, it just doesn't matter. It can't matter. See below for an example of a section of Christopher's writing that I've "purple penned." I like to lay down on the bed with hard copies of the work and go to town on it with pen. Then, I hit the computer and make my changes. 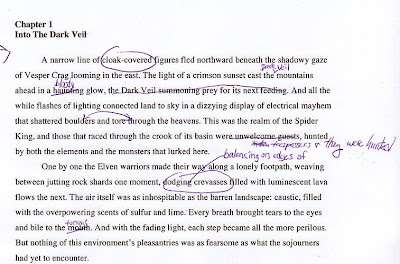 Reason I show these two is that they exemplify the benefit of having someone to bounce ideas off of: each one of us has some wisdom or experience that the other can learn. We teach each other and learn from each other. And guess what, it's also so much fun that it should be illegal. :-) 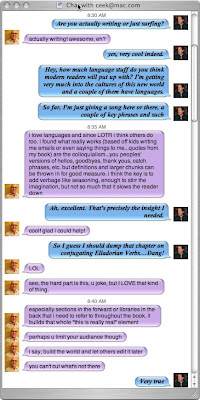 Part Three will be up in a few weeks.

Never alone.
Posted by WayneThomasBatson at 9:40 AM 17 comments:

Okay, so I admit it: I occasionally Google my books. Just a little. Okay…more than I should. Sometimes even when I should be writing.

Well, tonight's search turned up gold. You have GOT to see these two videos I found on YouTube. I was absolutely rolling as I watched these. Check 'em out!

What do you think?
Posted by WayneThomasBatson at 11:21 PM 13 comments: