Eric Reinhold's new book: Shield of Faith, sequel to his amazing debut, Ryann Waters and the King's Sword, has just released! Eric has a passion for the Lord and a passion for a tale well-told, so if you're in the market for something new, check it out. If you're a parent or a teacher, I can tell you this is exactly the type of story you want for your kids: Male and Female Protagonists, Multicultural Heroes, Danger and Adventure without Gore and over-the-top violence, and a message that can't be beat. See the sidebar for Amazon links to both books! Go get'em! Check out the back cover below. 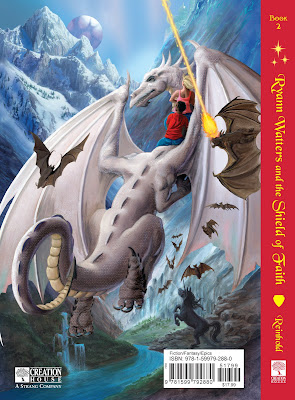 Like a few pictures in your books? Check out
a sample of the amazing artwork that you'll
find in Shield of Faith! 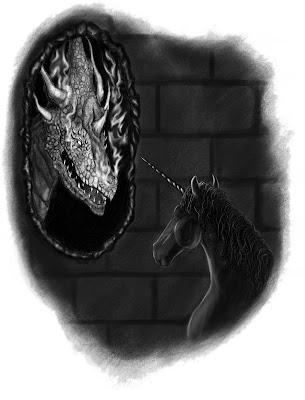 In other news: TitleTrakk.com has just kicked of their Hype-Machine for Christopher Hopper and my book: Berinfell Prophecies Book 1: Curse of the Spider King. Check out the article by clicking this link! 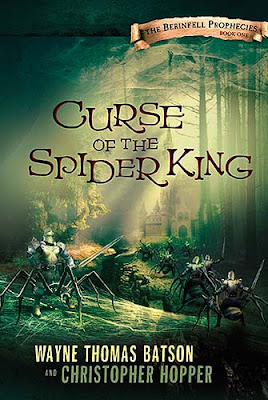 Also, we've opened the official Berinfell Prophecies Website. Big things to come there in the future. For now, it's just a landing page, but check it out and let us know what you think.

Also, we've moved the release date for Spider King to Oct. 4th! A month ahead of schedule. Woot!

Posted by WayneThomasBatson at 6:54 PM 23 comments:

Who is little Bunny Foo Foo? Aside from the old song some of you remember with great disgust, Foo Foo is my daughter Rachel's favorite little stuffed animal. Amazing since I think it came out of a Happy Meal. Nonetheless, Rachel loves to play with it, creating little adventures and homes and even feeding it. {Future novelist perhaps?}

Long story short, Rachel saw the commercial where "Daddy Businessman" went cross country on a trip and took his little girl's stuffed monkey {?} along. He sent back pictures of the little primate from all over the country.

So, Foo Foo went with my wife and I on a 7 Day/Night cruise of the Caribbean. I begin the narrative tonight and will add more photos and captions as the days go by. Enjoy the adventures of Foo Foo the Bunny...in the Caribbean. 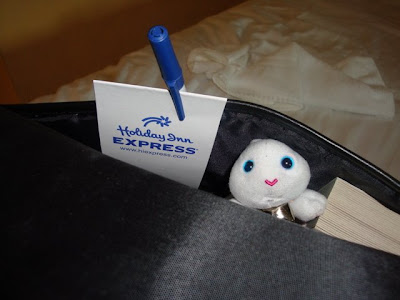 This is Bunny Foo Foo in my laptop case. This was his mode of travel while on the airplane and in transit. Foo Foo claimed it was comfortable but did not allow enough space to read. 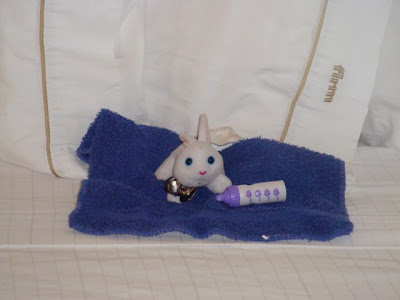 This is little Bunny Foo Foo at our hotel in Fort Lauderdale. As you can see, he staked out a primo spot on the bed. My wife and I were a little miffed about having to sleep on the floor. 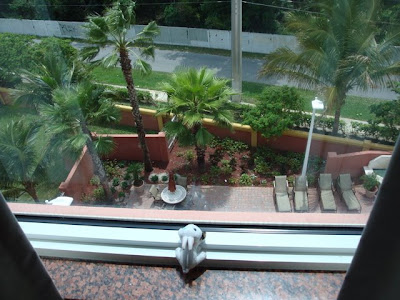 Gaining a measure of revenge, my wife and I sneaked out to the pool while Foo Foo was sleeping. Makes you wonder who took this picture, doesn't it? 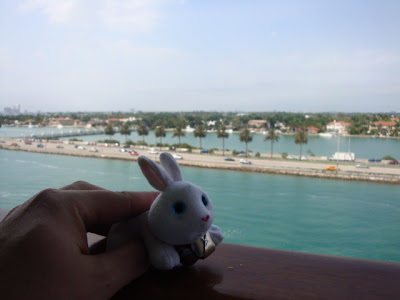 Mary Lu and I brought Little Bunny Foo Foo onto our cruise ship, The Norwegian Dawn. This almost proved disastrous as Foo Foo underestimated the trade winds in the Port of Miami and nearly flew off the railing of our balcony. My wife was all set to yell, "Foo Overboard!" but my catlike reflexes saved the day. 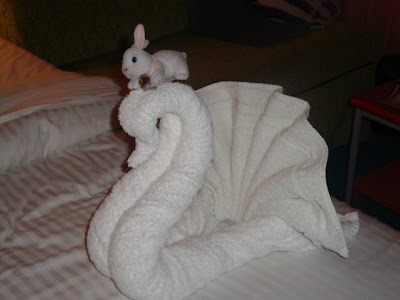 While my wife and I were out to dinner the night before our first island visit, Little Bunny Foo Foo discovered a talent for making strange animals out of bath towels. This, of course, is the dragon Smaug from The Hobbit. 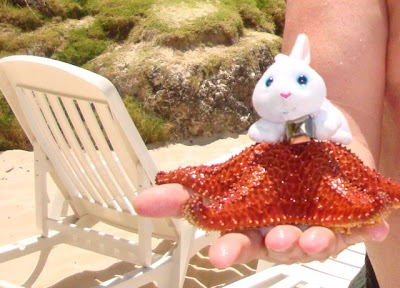 Speaking of strange creatures, my friend Dave and I rented snorkel gear on the beautiful peninsula of Samana in the Dominican Republic. There we found all sorts of cool sea critters: clownfish, knifefish, anemones, sea urchins, and HUGE starfish. As you can see, this one was pretty large (big as my hand). Later we found one as big as a dinner plate, but Little Bunny Foo Foo was afraid to get near that one. 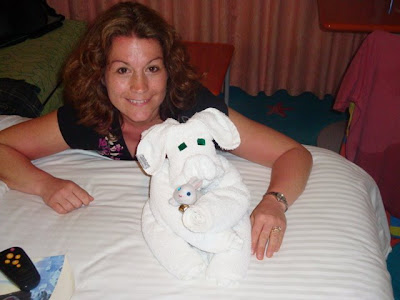 Little Bunny Foo Foo continues to impress the ladies with is remarkable skill of sculpting with white bath towels. This, of course, is the old TV show character Alf. Needless to say, this beautiful young lady succumbed to Foo Foo's charms. (My wife in the pic, btw). ;-) 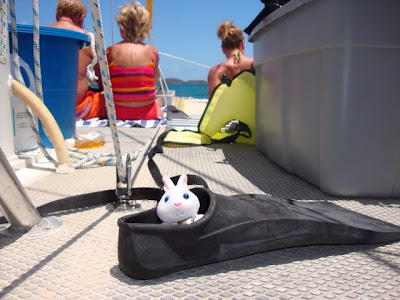 Still stinging a little that Foo Foo went dancing with my wife, I decided to take the little guy for a snorkeling trip off the island of Saint Thomas. It was an amazing experience. We saw tropic fish, stingrays, starfish, and sea turtles. Oh, and I must not forget about the sea urchins. Little Bunny Foo Foo had a --little-- trouble with the snorkel fin and got to meet a sea urchin up close and personal. 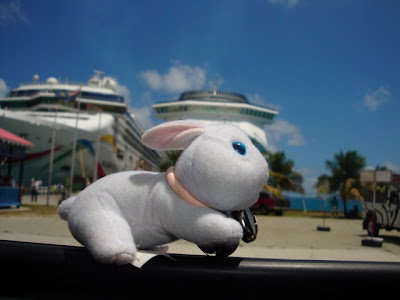 From Saint Thomas, it was on to the British Virgin Island called Tortola. Stunning island. The two wives were a bit tired of the sun, so they stayed on board the ship (see upper right). We were told that one thing we just couldn't miss on Tortola was the Caribbean's oldest rum factory. 300 years old or some such and quite a sight to see. So Dave and I took Little Bunny Foo Foo, grabbed a cab and were off. We had no idea what we were in for. 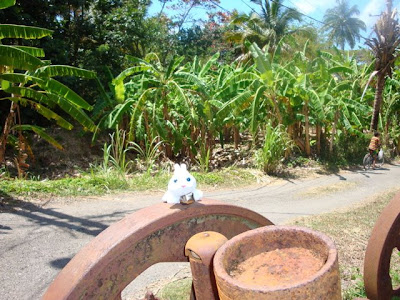 So Dave and I (and Foo) were headed to the ancient rum factory on the other side of Tortola. We expected this gigantic, old monastery kind of place with huge wooden doors, vast chambers, and windows casting streams of light in the age old dust.
Uh, not so much.

What you see above is Foo resting on some kind of old wheel. In the distance behind Foo, you see a huge banana orchard. Not sure if bananas are for the rum, but it was cool nonetheless. Anyway, back to the factory. 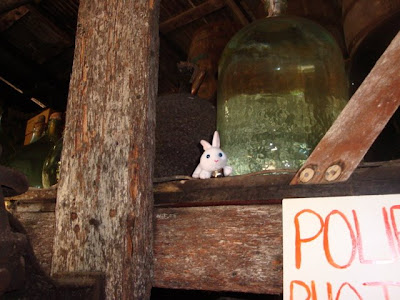 Turns out, the rum factory was this itty bitty shack in the woods. Seriously, it was about as big as my basement. Inside was still kind of cool: old beams, large glass jars, and tons of barrels. Above you see Foo attempting to hide from a horsefly that was bigger than he is. 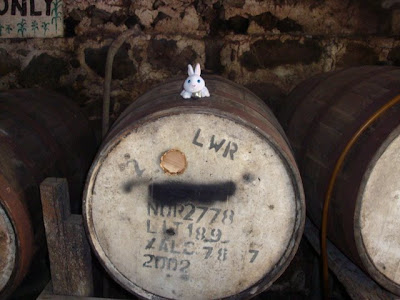 Above you see Foo Foo seated atop one of the many barrels. You see the date on the barrel? that means the rum inside has been aging since 2002. Some of the barrels were much older. As I'm sure you know, the Caribbean islands produce a ton of rum. (Official Disclaimer: Neither Mr. Batson nor Foo Foo advocate the drinking of alcohol. Very dangerous! Beware!) 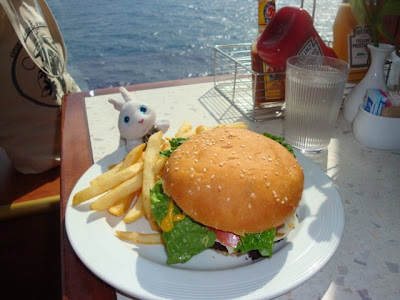 After that adventure which included a harrowing ride through the twisting mountain roads of Tortola in a van driven by the craziest cabbie in the islands, we returned to the cruise ship. As you can see, Foo built up quite an appetite. So did I. Mmmm, can you say, "Monster Cheeseburger?"
Yum. 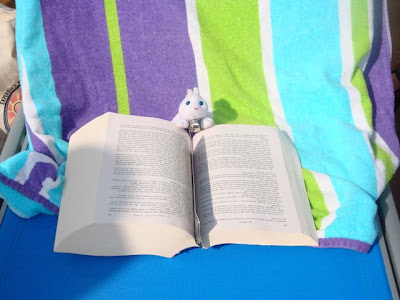 Next, Foo Foo settled down to read some cool epic fantasy by the poolside. In this case, Foo was reading Tad Williams' Memory, Sorrow, and Thorn Trilogy. Cool stuff if you're a patient reader. 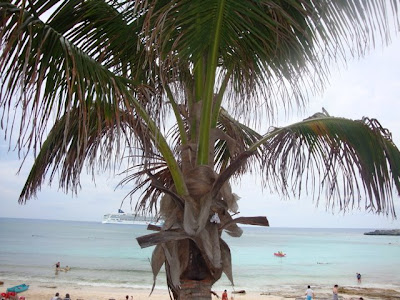 Our next stop was a little island called Great Stirrup Cay. It's owned by the Norwegian Cruise Company. Actually, not so impressive. But Foo Foo really liked the palm trees.
Can you see Little Bunny Foo Foo in the tree? 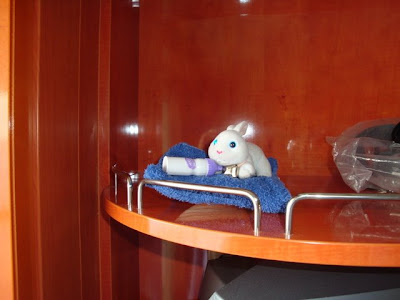 Foo Foo and everyone else were exhausted from the excusions and ready to hit the hay.
G'nite, Foo Foo!
Posted by WayneThomasBatson at 6:14 PM 41 comments: