Introducing Eric Reinhold
Eric Reinhold is the father of three—Kaylyn, Kara, and Kyler. While telling his kids bedtime tales, Eric developed the story of Ryann Watters. A graduate of the United States Naval Academy, Eric holds his B.S. in Economics from that institution and his Masters in Business Administration from the University of Baltimore. He is a Certified Financial Planner, having received such from the College of Financial Planning in Denver, Colorado. When not weaving his fantastical tales of supernatural adventure, Eric serves as President of Academy Wealth Management, a fee-based, financial planning firm utilizing Biblical principles. He and his wife,
Kim, make their home in Orlando, Florida where Kim home schools their three children. They are members of First Baptist Church Sweetwater in Longwood, Florida, where Eric teaches the Cross Trainers Bible Fellowship Group every Sunday morning. 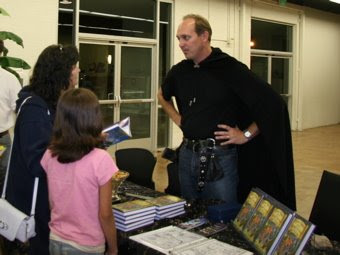 The picture you see below isn't really the most photogenic of our author, but it captures a bit of his servant's heart. The entire Fantasy Fiction West Coast Tour, Eric took it upon himself to be in charge of setting up and tearing down all of our banners and signs. He and LB took turns being in charge of stowing our swords and gear. He's a good guy through and through. 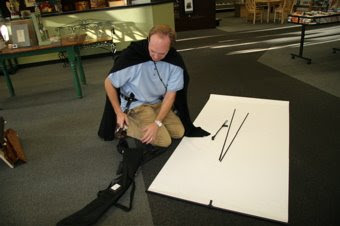 Eric is a big idea kind of guy. He does financial planning with all kinds of big wigs, including one of my all time favorite people, Redskins Hall of Famer Darrell Green. I have a hunch, we'll be seeing Eric's books do very, very well. 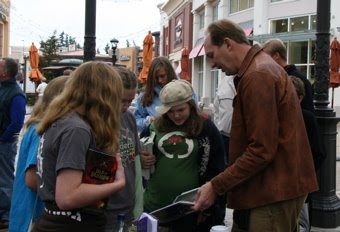 A little Q&A with Sir Eric the Author:

When did you first envision the world of Aeliana?
I first envisioned Aeliana in 1999. I grew up on fantasy novels like C.S. Lewis’s Chronicles of Narnia, Science Fiction, and was an avid comic book collector. All of these resources merged in helping me create my own fantasy world.

Why did you decide to use Mount Dora, FL as the setting for your story?
At first I was going to make up a fictional town in the mountains of Georgia or North Carolina and then I visited Mount Dora, which is only 24 miles from my house. It was perfect! As I describe in the novel, Mount Dora has so much character, with Lake Dora, parks, quaint shops, interesting alleyways, an old fashioned railroad and so much more. I also remember reading a novel when I was growing up in Miami which used Miami as the setting. It was so interesting to read a fictional story with real locations I had been to that I wanted my readers to be able to enjoy the same experience.

You said it took seven years from when you had the idea of this story to the time it became a hardcover.

I first began outlining my story in 2000 and had actually outlined all twenty chapters and written ten chapters when I unexpectedly had to have open-heart surgery for a congenital birth defect that I was unaware of. This setback during the period of the 9-11 crisis and subsequently starting my own business, resulted in my putting my project on the shelf for five years, until I picked it up in 2007… 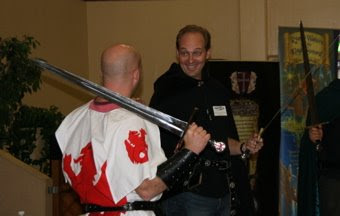 How did your publishing contract come about?
The Lord’s timing is amazing to reflect upon. I believe I was ahead of my time in 2000 when I first shopped my story idea around to Christian publishers. I believe I was the first to do so following the Harry Potter craze and Christian publishers weren’t ready for the concept. While I was building my financial planning practice from 2002-2006 I retained some amazing clients, one of which was Steve Strang, the President of Strang Communications, which the Creation House line falls under.

How old are your children now? Do you still tell them stories?
My children are 9, 12, and 15. The two younger ones are homeschooled and our oldest just started at a private Christian High School. The stories I used to tell the girls (12, 15) each night before I put them to bed were part of my inspiration for writing and alas they have moved on from dad’s stories, but still devour fantasy novels on a regular basis. I have started a new storyline for my son to try out some ideas.

You have an interesting background for an author, what is your desire in writing your novels?
I took a few creative writing classes in high school and of course at an engineering school like the Naval Academy, I had no writing courses. I was primarily self taught from books and took to heart the “show it don’t tell it” advice. I strongly believe that the people you know, the books you read, and the places you go have a significant influence on your life and have been a great impact on my writing.

You are President of a wealth management firm. Tell us a little about Academy Wealth. Who is it for and what services are provided?
The biblical principles on money are time-tested and have an influence on the advice I provide my clients in the areas of estate, tax, investment, insurance, and business planning. I have a unique investing process that is fee-based using exchange traded funds which is my primary service to clients – along with charitable planning strategies.

How did you come to know Jesus Christ?
I grew up in a Christian home and became a believer at the age of eight. I was a leader in my high school youth group at Old Cutler Presbyterian Church in Miami, FL and graduated from Westminster Christian High School. My wife and three children have attended First Baptist Sweetwater Church for the past thirteen years, where I am a Deacon, Adult Sunday School teacher, work with the High School Youth Group, and am on several committees.

The Annals of Aeliana is set to be a trilogy. How are you coming on the next book?
The series is based upon Ephesians 6 and the putting on the armor of God. Originally I was planning to make the series seven books based upon each piece of armor… and I still may; however the publisher suggested I start out as a trilogy. “You can always have a second trilogy.” I have outlined book two, “Ryann Watters and the Shield of Faith” and plan to have it completed in 2008 for release in 2009. 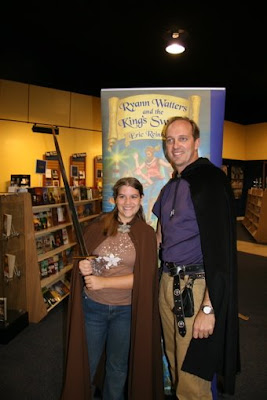 If you're looking for a great Christmas gift for the young fantasy reader
you know, take a look at the works of Eric Reinhold!

Posted by WayneThomasBatson at 7:12 PM 3 comments: