You Cannot Have it Both Ways America is paddling quickly in dangerous waters toward an unyielding and more perilous destination. With one breath we seem to want to exert a "moral right" to just about anything we want. Gay marriage, polygamy, divorce on demand, premarital sex, abortion, legalized drug use, ad infinitum. And yet, with the next breath, we deny that there is such a thing as absolute right and wrong. But we cannot have it both ways. Work it out with any kind of logic, and you'll see it ties itself in knots.

Others may claim that there actually IS an objective right and wrong, but they will refuse to define it. It's just something that is "self evident." But, if this is true, we have to ask WHY would there be a self-evident right and wrong? How did it get there? Most relativistic people don't want to go there because that line takes you directly to God. For there to be an absolute right and wrong it MUST come from something outside of us. Otherwise, we fall right back into "whatever works" and "whatever feels right," and eventually…mob rules and might makes right.

Wake up, America, before you demand so many freedoms that you drown in them.
Posted by WayneThomasBatson at 3:48 PM 10 comments:

Longing for the Straight Path...

Trust in the Lord with all your heart
And do not lean on your own understanding.
6 In all your ways acknowledge Him,
And He will make your paths straight.
-PROVERBS 3:5-6 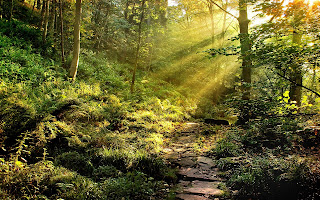 Back in the day, these verses were the bedrock that kept me from emotional ruin. In my early 20's when everything I'd planned on seemed to be crumbling around me, and I JUST-COULDN'T-UNDERSTAND how it had all gone so wrong, I used to recite these verses hundreds of times a day.

20+ YEARS LATER: these verses have come to life in me again, but in a very different way. Back then, I think it was just comforting to know that "my own understanding" was never supposed to be completely adequate. BUT NOW, I realize there is so much more there than simple comfort. There's action for me, which I dig. And there's an iron clad promise. How many iron clad promises do you get from the WORLD? Few, and the ones you can count on, you probably don't want anyway.

But here, I'm told, #1: Trust in the Lord & #2 In all my ways, Acknowledge Him, and HE will make my paths straight. Mannnnn, that feels so good. Oh, to have my paths all be straight. Not to say I won't have trouble or that I might not wander, but…if I consider my plans, my daily schedule, my work, my responses...and I acknowledge God in them, then the path that results will be straight by God's standard. How do we acknowledge God?

I think it's equal parts recognizing God's sovereignty in this area of your life and inviting God to rule over it and guide you. It is probably far deeper than that, but that's how I see it. So, as I sit down to work on a new novel today, I ask, "God, I acknowledge you in this effort today. Let it please you. Let it be yours. And please make my path straight. Amen."

What path lies ahead for you that you deeply desire God to keep straight?

Posted by WayneThomasBatson at 2:59 PM 6 comments: