Take a lesson on Character from the NFL; Who'd have thunk it?

If the title of this post made you gag, get a quick drink of water and bear with me. Just a single day after posting an article insisting that ex Florida Uber Quarterback Tim Tebow's faith would get in the way of his being picked by certain teams in the NFL Draft, Yahoo Sports turned around and published an article about how important a role Tim Tebow's character played in him being drafted so highly. 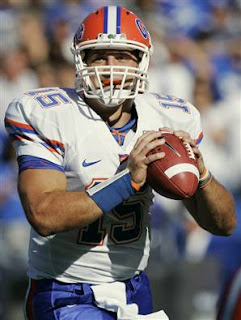 Just to be clear, I'm not knocking Yahoo for hypocrisy. Two different authors with two very different takes on the state of the NFL. In fact I laud Yahoo for publishing today's article because it was all about the NFL reevaluating what's important when it comes to draft day. At least with Round 1 of the NFL draft, there were several surprising developments, and they all involved teams choosing character over better talent.

In the first round, Tim Tebow (above) was chosen by the Broncos over several quarterback choices, even though many "experts" don't believe Tebow has the form/tools to be a star NFL QB. But in the wake of Steelers QB Ben Rothleisberger's recent troubles with morality, it seems the Denver Broncos wanted a "good guy" to captain their team. Bravo for them. The Broncos also selected wide receiver Demaryius Thomas over ultra talented Dez Bryant. Why? Character. Bryant's had troubles, lots of questions about his work ethic, etc. Not so with Thomas. Thomas (below) is a "good guy." 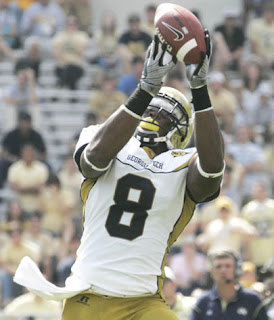 The San Diego Chargers went out of their way, trading up to select running back Ryan Matthews, stressing that he is the kind of guy they want as a leader in their locker room. Ryan, we learn, keeps his commitments. He signed to play college FB with Fresno State, but after that, several bigger, more influential schools came asking and offering. He turned them down. He's a good guy. 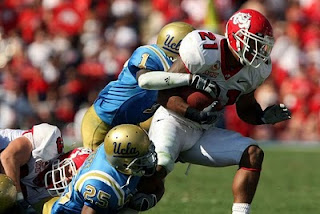 So what can we learn from the NFL? Well, maybe we can learn that when we do our inevitable picking in life, maybe we can make our picks based on character and substance over flash and style. No, we don't hold a draft for picking friends, girlfriends, or spouses, but we all go looking. How do you choose? I remember high school too well to have lost the chip I had on my shoulder then. It used to make me ill that so many of the girls I had crushes on went after the rudest, most disrespectful, foul mouthed guys in the school.

And how many times has "Nice Gal A" made a mess of her own life by marrying "Bad Boy A?" Too many to count. Some of our readers will probably support that. And it's not just the ladies choosing flash over faithfulness. Men often become bumbling idiots, fawning over the babe with the low cut neckline. Shame on us. We ought to be fighting to lay down our coats for the sweetheart next door. And forget romance for just a minute, what about plain old friends. Who do we hang out with? Do we gravitate towards good character? I contend that we should.

What would happen if we did? What would happen if we all chose friends, romantic friends, spouses, careers, neighborhoods, etc. etc. based on quality of character? My hunch is, we'd end up with a tenfold better society. Why? Supply and Demand. As a middle school teacher of 19 years, I've noticed something very interesting. If you have a class where the good kids get the majority of the attention, disciplinary issues begin to vanish, and good kids multiply. If the opposite occurs, and the idiots get most of the attention, sooner or later, you'll end up with a room full of idiots.

Imagine a high school where the girls all went after the "nice guys." Pretty soon, the jerks and blowhards would straighten up. Think about it, ladies, who do you really want for a husband? The cute high school guy who cuts class, smokes, and defies authority? Extrapolate what that will look like in ten years. Uh, yeah, not so good. And guys, who are you going to bring roses to? The sexy party girl who flirts with ALL the boys? What kind of mother will she be for your kids? Hmmm...

And if you do decide to hang with the kid who drinks underage and occasionally shoplifts, where do you think you'll end up? I'm just asking. Because if the NFL can figure out that character matters, should we be able to figure it out as well?
Posted by WayneThomasBatson at 11:30 AM 14 comments: