You ever play the Hot & Cold game? A friend hides something in the room/house while you aren't watching. Then, you begin the hunt. As you travel, your friend calls out warm, warmer, hot, hotter, hottest, red hot as you draw near to the hidden object or cool, cooler, cold, colder, coldest as you travel father away. There's a ton of suspense and anticipation in this game. You follow your friend's prompts like a trail of breadcrumbs, all the while trying to guess where the object is hidden. If that could be done in your writing, imagine the suspense you could build. You place a winding path before the readers and leave a trail of breadcrumbs for them to follow. Suspense Technique #5 is: 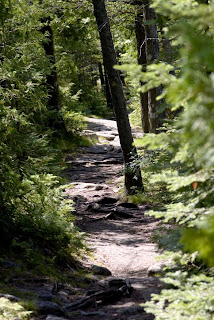 The Trail of Breadcrumbs
The technical/literary term for this technique is foreshadowing, literally meaning to cast a shadow of something yet to come. You want to make the shadow indistinct, so that the reader won't know for sure what it is, but…they can and will guess. And whenever you can get your reader making inferences and predictions, you will draw them in. Think about it this way: your reader wants to be clever, wants to figure things out, and wants the payoff to a) discover they were right or b) have the author fool them in a really surprising (OH, I didn't see that coming) kind of way. You, the author, drop a trail of breadcrumbs for the reader to follow.

There are many ways to pull off this technique. You can have a detail, a character's softly spoken words, a prologue, etc. stand out like a sore thumb from the story at large. The Movie War of the Worlds (Tom Cruise version) begins with this very odd microscopic view of water droplets (voiced over by Morgan Freeman, I believe). And at the beginning of the movie, you find yourself wondering, "what was that all about?" Then, at the end, you discover that water (or was it germs in the water) kills the alien invaders.

Another way is much more subtle…a hint dropped early in the story that comes to fruition. I loved Gandalf in the Mines of Moria telling Frodo, "For good or ill, Gollum may still have a part to play in this tale." Boy did he.

I am a big fan of this technique and attempted to use it heavily in The Door Within books. In Book 1, the reader discovers that Falon (and all mortiwraiths) must remain underground because exposure to sun or moon will kill all of her race. But…if something could cloak the sun and moon, then lookout! And in book 3 we see Falon unleashed. The who first chapter of The Door Within is massive foreshadowing for the climax of the series.

Because you use this strategy a little at a time, spread out over the course of your story, it's a little more difficult to pull off in a short text example.

"We're all friends here," said Kellen the Storm Leader. "Most of us have fought and bled together. I do not believe the traitor is among us."

Nods were exchanged throughout the circle of warriors assembled in Gale Keep. But so too were uncertain glances. Suspicion still lingered and, like a slow acting poison, it threatened to weaken the group. If not for Kellen's unassailable will, they would have foundered long ago.

As they funneled out of the keep, every knight met Kellen's gaze and returned his grim smile. But Vesyr kept his interaction with the Storm Leader short, hoping Kellen would not notice the slight twitch that had developed under Vesyr's right eye.

YOUR TURN: Create a story excerpt where you drop a trail of breadcrumbs for readers to follow. Two entries per person. The author with the best use of Suspense Technique #5 will receive a signed copy of either Isle of Swords OR The Door Within, The Author's Cut!
Posted by WayneThomasBatson at 2:13 PM 83 comments:

And now for something completely different…

These words, uttered by the infamous Monty Python troupe also very much remind me of Jeff Gerke's Where the Map Ends.

If you haven't already, check out the Fantastic Visions section. I love Fantasy art. As you can see above, I dabble in a little 3D art myself. Actually helps me create settings for my books. But the artists on Jeff's site make me look like a toddler with a gray crayon.

And Future Published Authors: don't forget this section because you're going to need someone to illustrate your cover!
Posted by WayneThomasBatson at 8:46 PM 11 comments:

Where the Map Ends: An Author's Armory

Remember that scene from Lord of the Rings, The Two Towers, the scene where Aragorn is discouraged by the situation at Helm's Deep?* He knows a cloud of orcs is about to descend, and he knows that the defender force of those who "have seen too many winters…or too few" will be sorely inadequate to face the coming storm. Aragorn meets a young lad, sees the fear in this teen warrior's eyes, and something changes for Aragorn. He decides then and there that the odds may be in the enemy's favor, but there is hope. He breathes life into this young warrior's heart, and in so doing, Aragorn finds his own strength. Then, the good part: a pounding, pulsing brass musical score playing beneath the scene, Aragorn enters the armory and starts gearing up. Belts tightened, swords--and daggers--sheathed, coats of mail girded, and bows slung! Aragorn is ready for battle.

This scene is remarkably applicable to the Christian writer, esp. to one not yet published. You may be struggling, not knowing where to begin. Maybe you're daunted by questions: Is there a market for Christian Fantasy or SciFi? How do I get an agent? Maybe even…What font, size, and spacing should I use for a manuscript? Maybe, like Aragorn, you feel called to do something great but feel inadequate for the task. The enemy may seem huge--overwhelming even. But then…you visit the armory, Where the Map Ends, and everything changes.

Jeff Gerke, creator of
Where the Map Ends.

Mannnn, if I'd only known all this about fifteen years ago…LOL

The main page of the Jeff's site is enough to stir the writing passion God has placed within you. Don't believe me? See what it did for author Christopher Hopper. But if the passion is already simmering, but you just don't know where to start, may I suggest you begin Where the Map Ends.

*Yes, I'm a LoTR geek and fiercely proud of it.
Posted by WayneThomasBatson at 11:19 AM 19 comments:

Where the Map Ends...

The February CSFF Blog Tour ventures into new territory for the next coupla days. We won't be reviewing a book at all, but rather a righteous SciFi/Fantasy Website called:
Where the map ends.

I've only begun to explore its richness. But so far it seems to be a treasure trove for anyone who likes to write or read SciFi/Fantasy. I particularly enjoyed the interview with Frank Peretti.

The booklist ROCKS as well. Just make sure (ala the Matrix) that you take the RED pill.

More over the next coupla days. Click on the link above or in the sidebar to go…Where the map ends!
Posted by WayneThomasBatson at 1:52 PM 23 comments: