This summer, I plan to RE-release Dark Sea Books 1 (Sword in the Stars) and 2 (The Errant King). I'm not changing the plotline in any significant way, but I'm doing a lot of what I call "Rendering."

As in digital animation where, pixel-by-pixel and line-by-line, the image becomes more detailed, more lifelike, and altogether more breathtaking to behold, I've done a serious overhaul of the language. Often it's as simple as deleting one word from a sentence. At times, it has been fleshing out a setting that I carelessly "mentioned" in the original. In sum, the new versions of Sword in the Stars and The Errant King will be the same story, told more precisely and more vividly. And yes, Dark Sea book 3 "Mirror of Souls" will follow shortly afterward, aiming for Fall, October-ish release.

If you've read this far, thank you. That probably means that this book series means something to you. So here's where I could use a little help: I need a front cover branding-kind of font for the series. There are a gazillion fonts out there, but I'm looking for something that speaks of "Fantasy" but not of hokey, over-the-top fantasy. I want something totally readable, even when it's very small. When I say branding, I want this font to become the brand name look so that whenever you see the font, you'll know it's a dark sea font, you'll know it's this series. Above all else, it'll need to be professional. 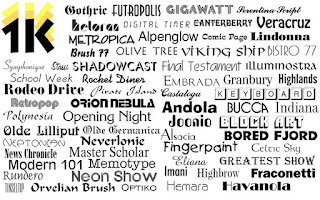 If you have a font in mind that might fit the description above, post a screen shot of it, or if you've seen another fantasy book cover that has a very cool font, please post it in the comments. If you come up with a font, and I end up using it (or even one like it), I'll give you a first edition signed copy of "Mirror of Souls" BEFORE ANYONE ELSE GETS IT.

*I should also mention that the reason this font needs to absolutely ROCK is because I'll have BRAND NEW COVER ART for the whole series. If you've seen Caleb Havertape-illustration​'s work, you know these images are going to blow people away, so a lame font just cannot be permitted.
Posted by WayneThomasBatson at 10:01 AM 12 comments: