My wife and I went to see Avengers: Age of Ultron last night. It was hyped. I was hyped. The movie did not disappoint. In fact, I will go so far as to say that Age of Ultron has landed my top ten favorite movies of all time. I know, that sounds like hyperbole, and it's likely a very biased statement. 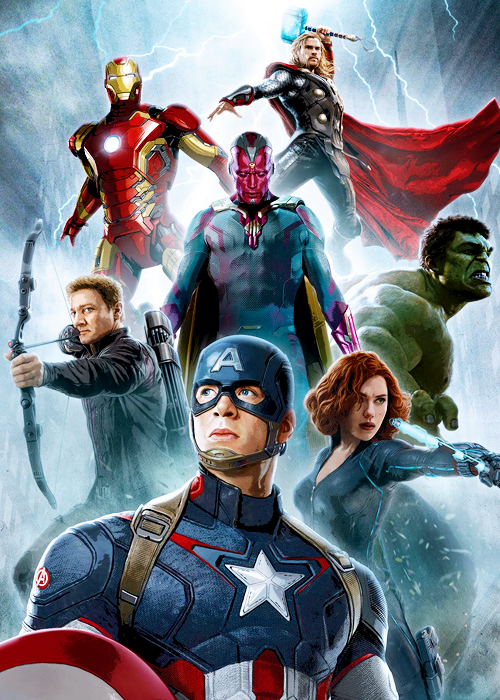 In fact, this review will be entirely biased because I'm a storyteller. And throughout the event (I don't feel like calling it a movie does it justice), I found myself *marveling at the skill through which this story—these multiple stories—were told.

[SPOILER ALERT] To the best of my abilities, I will avoid specific spoilers and plot points. But I cannot avoid talking about the themes and artistic elements. So, if you don't want any of it ahead of time, just check back and read after you've seen the movie.

Joss Whedon is a freakin' genius. There, I said it. Call me a fanboy. I am. I was literally in awe of how he could wield such a massive ensemble cast and yet manage to tell each of their stories in one movie. Part of it is Marvel's brilliant universe, having TONS AND TONS of excellent source material and then releasing the stand-alone Iron Man, Capt. America, Thor pics, etc. But still, Whedon took 2 hours and 21 minutes and ran us through a tragic, inspiring, painful, and wonderful gauntlet of each character's lives, hopes, fears…

Here, I need to mention the pacing of the film. There was action. Duh. And I mean brilliant action. In some scenes, I was literally torn, not sure where to look because there were so many interesting things going on in ever square foot of the movie screen. Seriously, try looking away from center screen in just a few of the scenes, and you'll see the attention to detail that I'm talking about. I want to see this movie about five more times.

For me, however, the greatest draw to this movie was its diverse and yet cohesive thematic elements. Again, I won't tell you specifically what happened nor who was involved. But I absolutely have to talk about this. Age of Ultron connected with me on multiple levels. Whedon and his brilliant cast found a way to take ultra-beings and make them ultra human. One of the biggest themes was the fear of the monster inside of each of us, the fear that we might do irreparable harm, the fear that we won't measure up, the fear that we will fail, and the fear that we will let others down. You get to see, hear, and feel each of the cast battle with these. There was betrayal, there was grace, and there was redemption. There were more Biblical themes than you could shake a tract at. What the enemy meant for evil, God used for good. Seriously? Call me blown away.

I'm still reeling from how multi-dimensional all the characters became. There was a study in each scene, a study in each exchange of dialogue, and a feast for the eyes. So, yes, I'm biased. I'm a storyteller, and I get excited when I witness good storytelling. And I have to stand up and applaud when a mainstream movie delivers a hammer-shot of take-home-value.

*Pun very much intended.
Posted by WayneThomasBatson at 9:34 AM 4 comments:

Starting Monday, April 27th, all of my Kindle Books* and Short Stories* will be on a MASSIVE SALE. Every book regularly priced $2.99 or more will become .99.

Every book regularly priced below $2.99 will be absolutely FREE. And the sale price will continue off and on between Monday and Wednesday (4/27--4/29).

Which book which days? You'll have to get clicking to find out.

Here's the link you need:

GHOST on Sale! Less than $1 for a 400+ page Thriller? Crazy! But that's not all: Strylun & Xerk, The Skeleton Project, Dragon in My Closet, Storms Captured, Forget-Me-Not, and more—all on sale!


*Refers only to my selfpublished titles. The publisher controls the Kindle prices for my other books. Sorry about that.

Posted by WayneThomasBatson at 6:27 PM No comments: