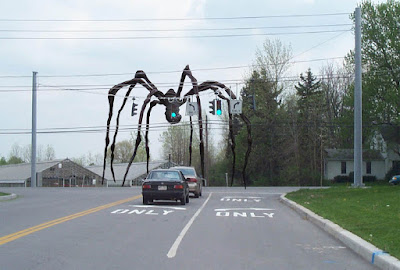 Hi, Faithful Readers and Assorted Elves!
Unlike the poor folks in the cars above, I have good news for you! After months of prayers and waiting, Thomas Nelson has officially made it possible for Christopher Hopper and I to go ahead with Book 3 in the Berinfell Prophecies series! That's right, the long awaited sequel to Curse of the Spider King and Venom & Song is on the launch pad and ready to fly!

The outline is done. We'll take the next few months to make sure it's sharp. Hopefully we'll have the principle manuscript complete by the fall, and have the book ready for readers by the Christmas Holiday season. Initially, we'll be releasing Berinfell 3 as an eBook in multiple formats: Kindle, Nook, .PDF, etc. Also we'll use a print on demand service to do Paperback copies.

And, if we can generate enough interest, we are thinking of releasing Berinfell 3 as a special Collector's Edition Hardback. These would be numbered and signed by both authors and would include exclusive artwork by the authors, readers' guides, and other behind the scenes stuff.

And thanks to all who have been praying for book 3 to happen. Christopher and I are stoked to get writing, and if the outline is any indication, Book 3 will definitely be the best of the series. Absolutely EPIC!!
Posted by WayneThomasBatson at 2:32 PM 97 comments: