A personal trainer I know has a sign on the gym wall that reads: "Pain…is just weakness leaving the body."

It's very motivational, a great line to defy the burn and squeeze out a few more reps, but it's more than just a perspective thing. It's actually true. Muscle is what makes you strong. To grow new muscle, you must literally damage the muscle you have. Either through volume, weight, explosive movements, or a dozen other training techniques, you must cause these micro tears in the muscle to trigger your body's rebuild-overcompensate response. Pain, really is weakness leaving the body. 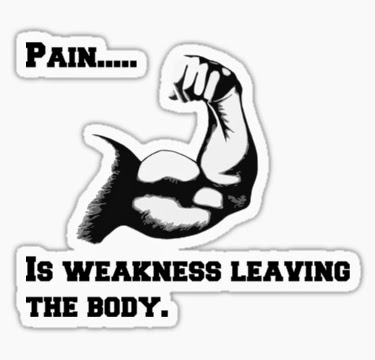 That got me thinking about a direct parallel to living as a Christian in a broken world. But rather than Pain being WEAKNESS leaving the body, it seems like something else. Self.

For the Christian: Pain is Selfishness Leaving the Soul.

Jesus tells us if we lose our life, we will find it. He tells us to take up our cross and follow Him. He tells us to serve others, to die to self, to love all the time, even when it hurts, even if it leads to death. But, you know, it hurts a little to do any of these things.

The longer I've been a Christian, through trial and much error, I have watched many sins that used to haunt me, begin to slowly die away. But sometimes, it really hurts. Many of us might not admit it in public, but we have certain sins that we cling to. I'm not going to name them. We all know what they are. And some of these sins aren't really sinful in and of themselves, but because we put them before God in our lives, they have become snares…sinful snares.

About ten years back the game of golf had to die in my life. This might sound silly to some, but it's not. I was really getting into golf. It was beautiful scenery, fun competition, and even a bit of "man time." In essence, nothing wrong with it, but it became clear to me, that it had to go. Why? Well, each round of golf takes between 3-5 hours, more if you travel and grab a bite to eat with the guys. With a young family at home and the calling to be a novelist, I no longer had that time to spare. But, I fought it. I fought it for much longer than I'd care to admit. I made "my golf time" an idol and placed it ahead of my wife and kids, and worse still, ahead of God. And it hurts to let what we call "our stuff" go. When the guys call and invite, when the best ball tourney shows up…and I need to say no, it takes a chunk of flesh with it.

And golf, honestly, was the least of my worries. Over the years, sin after selfish sin, had to die. And each time, if felt like a mortal wound. But in the end, you know what if feels like? It feels like freedom.

It's not over. I haven't "made it" yet. There's more pain on my horizon, that is FO SHO. But the dynamic is very real: if you die to self, God gives you freedom and life. Like Paul, we can probably all admit: "Not that I have already obtained it or have already become perfect, but I press on so that I may lay hold of that for which also I was laid hold of by Christ Jesus."

What is that secret sin your clinging to? Or maybe "sins" plural? Time to let them go. Time for them to die. Supplant them with service, love, giving...whatever God asks of you. And don't do it alone. Invite God into the process. Ask Him to put these selfish "idols" to death. Make no mistake, it's going to hurt. The longer you've clung to each sin, the more it hurts to rip that scab free, but it's worth it. You'll find life.

Posted by WayneThomasBatson at 12:43 PM No comments:


Ever had one of these moments? I'm reading the account of Jacob and Esau from Genesis 25, and I'm thinking this about Esau: "You idiot! You sold out your birthright for a bowl of stew? What kind of moron does that?"

Then, there was this companion scripture from Hebrews 12:

"See to it that no one comes short of the grace of God; that no root of bitterness springing up causes trouble, and by it many be defiled; that there be no immoral or godless person like Esau, who sold his own birthright for a single meal. For you know that even afterwards, when he desired to inherit the blessing, he was rejected, for he found no place for repentance, though he sought for it with tears."

That's when I got a Holy Spirit Facepalm. What kind of moron does that, Wayne? Uhm, go look in the mirror.

No, I didn't sell my birthright for a single bowl of stew, but I might just be in the process of throwing my birthright away for a few hundred bowls of nachos. In the past ten years, I've gained 100lbs. ONE HUNDRED POUNDS. Through selfcentered eating habits, I've somehow managed to grow a whole new person…a rather flabby feller that I carry around with me wherever I go. Well just slap my momma and call me Esau.

God has seen fit to allow me to be born, live, and have one amazing life, but at this rate, I'll be checking out LONG before God's plan for me (my birthright) is finished. I don't want that to happen. I cannot allow that to happen. I've got to change. I don't know exactly how, but tomorrow is too late to start. Now is the time.

How about you? Maybe, it's not food, but some other thing that has way too much of your time and attention. Maybe it's something else holding you back, keeping you from your birthright. Know this: you have a birthright. That is to say that God has a purpose for you. You may not know what that purpose is, but the beautiful thing is, you don't have to know. God's making a straight path for you. It may look like a meandering, haphazard path to you, but to God, it is the Laser-straight Path that you were born to live. The question is, are you squandering your birthright? Are you bathing in immediate pleasures and fake fulfillment while turning your back on what might be?

CS Lewis puts it this way: “It would seem that Our Lord finds our desires not too strong, but too weak. We are half-hearted creatures, fooling about with drink and sex and ambition when infinite joy is offered us, like an ignorant child who wants to go on making mud pies in a slum because he cannot imagine what is meant by the offer of a holiday at the sea. We are far too easily pleased.”

Have you been living an Esau life? If so, get a Holy Spirit Face Palm and floor it toward the life you were born to lead. 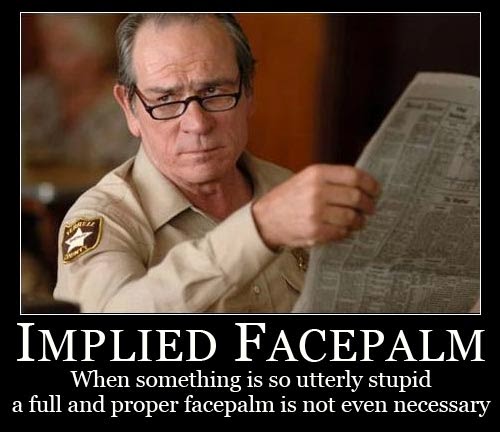 Posted by WayneThomasBatson at 12:54 PM 4 comments: