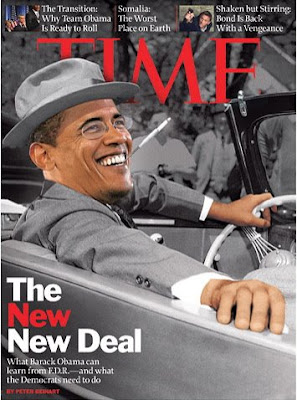 Well, it's Inauguration Day. The whole country--check that--the whole world is abuzz with hope, love, and change! Barack Obama is now President of the United States of America, as well as, the darling of the media and well, just about everybody. Honestly, I'm a little concerned with the combination conquering war hero, super bowl winner, rock star treatment we're giving Obama. I'll explain why in a minute.

I keep seeing news features with people swaying in jubilation over the event. And then, there are the tears. I've never seen so many tears. People just weeping over this man's ascendancy. And I get it. He's the first black president. He is kind of an embodiment of the hopes and dreams of MLK and others. He gives hope to all races that if you work hard, you CAN do anything. This is all great and very heart-warming. In all honesty, if he wasn't so Pro-Abortion and Pro-Gay Rights, I might have voted for Obama as well. He's quite charismatic and brave. I will be praying for him as often as I can. I hope he does wonderful things for our country, and I hope he'll bring about the "right" kind of change. But folks, can we quit the hysteria? Barack Obama hasn't done anything yet.

He reminds me of one of those college football quarterback prospects. There's all this hype about the guy. He's risen through great hardship and emerged victorious in all these contests. Maybe he's even won the Heisman Trophy. So on Draft Day, Mr. All America QB goes #1 and signs a contract that will make him a gazillion dollars. But Mr. All America hasn't played a down in the NFL. Many of these "can't miss" athletes do miss and miss badly. The NFL has a level of pressure and expectation all its own. It's a different world. And not everyone can weather the storms it throws at you. That's just the nature of football.

Barack Obama has just been handed the keys to the most important position in the world. I'd have to say the Presidency has a little more pressure involved than the NFL. Don't you agree? And as of today, Obama hasn't taken a snap. I pray that we can look back on his career and see that he has changed America for the better--and not just the public opinion kind of better either. I mean the kind of better that God would approve of. I hope he lowers taxes, keeps America safe, fixes the economy, and ushers in an era of personal responsibility. But I also hope that, if he is a Christian as he claims to be, that he will take God at His word. I pray that we will look back and see that Barack had a change of heart and did not sign things like FOCA or appoint pro-abortion supreme court justices. And I pray that he will not champion the destruction of traditional marriage and family. But until we can look back and see how President Obama serves, we need to stop idolizing him.

Have you seen the above Time Magazine cover, placing Obama into FDR's likeness? Okay, we have history on which to judge FDR, but not Obama. Mr. Obama, you're not FDR…not yet. Maybe you'll be better. Maybe not. But seriously, with all the hype, I'm surprised Time didn't show Obama wearing a long white robe and coming on clouds with heavenly light shining down on him and a dove in his hand. This hero-worship is unreal.

There is only one God and only He deserves our adulation.
Posted by WayneThomasBatson at 3:11 PM 9 comments: