This is Not Funny. Not at all.

Maybe I spend too much time surfing the Net. Today on Yahoo, I found this article on Late Night TV host Conan O'Brien officiating a gay wedding. Looking at the headline, I thought, "You're kidding me." Nope. Not kidding at all. Here's the article if you want to read it: Conan's Big Day 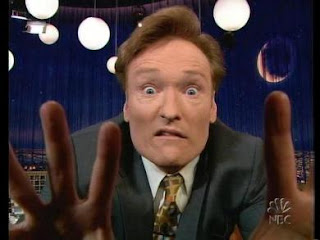 Note to Young Readers: This post may be a little R-Rated, just because of the subject matter. I'll be addressing the issue of gay marriage, so please check with parents about reading on.

On some articles, Yahoo gives readers the option to post comments. So, I did. Weird thing is that, as I was writing, I felt a strange hesitance...a sense of "Oh, this is going to ruffle some feathers, maybe I shouldn't." But feeling that makes me mad. It shows just how pervasive the culture's influence has been on me and largely on Christianity as well. Liberals and activists have so "normalized" things like homosexuality that Christians get timid. We become afraid to express our opinions for fear of being called a bigot or worse. Well, forget that. Christ told us we should expect to be insulted for His name. Does that mean we go hate on people? No, of course not. We LOVE people. ALL people. But we don't condone sin--not our sin or others. And we certainly don't sit back and allow sin to be called good.


So, for what it's worth, here's my take on the Yahoo article:
It's completely appropriate that a comedian officiates this same sex marriage because it's a joke. It's a sham and a mockery of a pure and beautiful thing between one man and one woman. Look at it this way: from the beginning of the cultural practice of marriage it has ALWAYS been defined as one man and one woman, as is natural and fitting. Male and Female we have been created. No way around that. (Even if you don't believe in Creator, Created, or Creation). Humans have two sexes: Male and Female. The way the penis is shaped, the way it works, the way it's stimulated is completely in concert with the way the vagina is shaped, the way it works, and the way it is stimulated. Ask any doctor, nurse, or expert in human physiology. You'll see a myriad of amazing features of male and female anatomy and why they work the way they do. Whether you believe in God or not, you have to delude yourself not to believe that Male and Female were made, designed, evolved FOR EACH OTHER. And rational people had always understood this, and so marriage was appropriately used as a term for a ceremonial (and spiritual) union between man and woman.

And let's not have any of this nonsense, playground name-calling. Bigot, homophobe, and the like. This name-calling is what people do when they run out of intellect. They hope to bludgeon those they disagree with into silence. I could just as easy call you a bigot for not accepting my views on sexuality. I might even go so far as to call you a "Christo-phobe." Maybe I should...what with the way some people react when you mention God or, heaven forbid, Jesus. When I speak out against the practice of homosexuality it is no more "hate-speech" than someone who disagrees with your politics or *gasp* your opinion of a sports team. You may be a rabid Dallas Cowboy fan and think me a barbarian for liking the Redskins, but when I diss the 'Boys, you wouldn't likely call it hate speech. It's a difference of opinion and/or preference. So dispense with the name-calling and start offering rational, researched, evidential responses.

And on that note, I want to make clear that, as a Christian, I cannot support or condone sin of any kind. The scriptures make it clear that homosexuality is one kind of sin, just as I mentioned before: sex outside of marriage, incest, adultery, etc. But please know, I understand the depth of love that all kinds of people can have for each other. The Bible talks clearly of friends who are closer than brothers. And there are men I love with powerful intensity. But the problem begins when brotherly love converts to lust and sexual behavior. That perverts actual love into something deviant. No matter how many people want it or "feel it" it's just not right. But here's the thing: if Jesus came today instead of 2000 years back, I bet He'd hang out with gays in much the same way as he did the tax collectors, prostitutes, and Samaritans. He would flock to those who recognized their need for love and relationship, and HE would give them the water that cures their thirst forever.
Posted by WayneThomasBatson at 6:33 PM 16 comments: