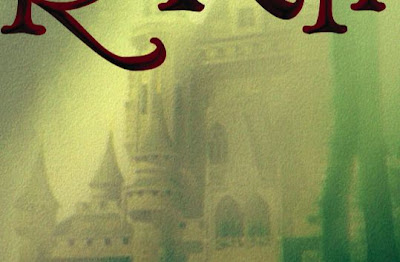 If you're a little late to the party, allow me to explain what you're seeing in the image above. This is a piece, the 3rd so far, of the cover design for my next book: Curse of the Spider King. The first book of an epic fantasy series coauthored with Christopher Hopper, Spider King takes the traditional "portal fantasy" and turns it on its head. Rather than just sending a few kids into a fantasy world, we ask, "What would happen if the fantasy world came to us?"

A lot of writers, editors, and publishers will tell you that, if you don't "feel it" when you're writing a story, you're readers won't "feel it" when they read the story. I can honestly say, Christopher and I were "feeling it" as we wrote Spider King. It is the MOST fun I've ever had writing, and possibly the most "creeped out" I've ever been writing. There's one scene that Christopher penned that is every child's worst nightmare come true. It reminds me of a recurring dream I used to have, one that completely freaked me out.

Also, just a reminder that we have a contest going on. Design a HEADER for this blog and win a signed copy of any book I've written, including Spider King! See the earlier posts for details.

The Art of Description

I. When to Describe:

The first thing to consider about description is that it generally slows down the pace of the story. So, if you're working on an action scene, you may not want to hit the brakes with a bucket of description. Imagine a car chase: frantic, treacherous action…but then, the author takes half a page to describe the nearby skyscraper. Good idea? Uhm…not so much.

Here are some times when you probably want to describe:
A. When we first meet a character: readers need to see who they are dealing with.
B. When you bring the reader to a new setting: see the picture above. This is the scene in Fellowship of the Rings when Aragorn brings the team to Lothlorien. It is the reader's first glimpse of the place. Tolkien spent pages describing it. Good idea? Absolutely.
C. When you are foreshadowing: dropping clues early on in the story can lead to supercharged scenes later. Sometimes, a clue is a little too obscure. Give it a little extra description, so it will stand out just a bit. The reader will wonder, and that's a good thing.

II. What to Describe:

Let's say you've identified a place you want to describe. Your hero has just wandered into the forest above. Now what? What do you actually want to describe? Rule #1: Do not attempt to describe everything. This goes for characters and settings alike. I can't tell you how many young writers introduce a character by giving a page of head to foot description. YIPE. If there's anything that screams: NOVICE, that's got to be it. Describe just a few things, but particularly something your reader can use to tag the character or place. Harry Potter had a lightning bolt scar on his forehead. Gandalf had bristling white eyebrows that stuck out past the brim of his hat. Robert Crais character Pike always where's aviator sunglasses. Those are quirky descriptive tags that allow a reader to file the character away. Every time the character appears thereafter, the reader says, "Oh, that's the kid with the scar."

Look back at the picture above. Sorry, I couldn't find a larger version of it. It's a cool picture of a creepy forest. So what do you describe? Give it the glance test. Glance at it. Look away. What do you remember?

I remember that it was misty. The trees were very dark. And, they seemed to be leaning in. It feels kind of suffocating, doesn't it? Cool! Describe that element. Don't mention that a little white moth flew by. Who cares?! Again, give the reader some meat for his/her imagination. The rule is: Immerse, don't drown. You want the reader to go there, but not to get sick of being there.

III. How to Describe:

Everyone knows you describe with adjectives and adverbs, right? Sure. But what about verbs? You might ask, uh, but those are those action words, right? They don't describe anything. In fact, that's why we have adverbs...to describe verbs. Right?

Wrong. Verbs are action words, but put another way, verbs are words that SHOW action. Sound familiar? How many times have you heard: "Show don't tell"??? It's too true. And verbs are the perfect thing to show the readers what's going on. The key is to use specific verbs. Why say "He ran quickly." When you can say, "He sprinted" --OR-- "He charged."??? Find the right verbs for the scene. Be precise with your verbs and watch your story come to life.

A word about mood: When getting ready to describe something, consider the scene's mood. What do you want the reader to feel. If it's sad, don't describe the cheery elements in the scene. And don't use cheery words to describe things. Pick the bleakest elements of the scene and describe them in bleak terms.

Christopher Hopper does a cool drill with students. He has them look out of a window and describe what they see. First, a happy scene. Then a sad scene. The results are amazing. For the happy scene, kids described the warm sunlight, the light breeze, the bright green leaves, the bunny shading beneath a full pine. For the sad scene, the kids described the veil of clouds that obscured the sun, the breeze that did nothing to soften the brutal heat, the dead leaves, sagging branches, wilting plants, etc. Try it yourself and enjoy the difference.
Posted by WayneThomasBatson at 6:52 AM 14 comments: