Amazingly good news: I've just been given an Author Forum at SFFworld.com. This is a hugely popular, secular Science Fiction and Fantasy website. This place gets tons of traffic from fantasy/specfic fans all over the world. I've been a member since 2005, but now, the powers that be have given me the keys to run my own forum over there.

I won't decrease my activity on this blog at all, but a forum at SFFworld will get The Door Within Trilogy and my new books A TON of exposure. A forum is also a great place to hang out with folks in a cyberland kind of way.

I've posted an Introductions Thread. Click on over and say Hi! 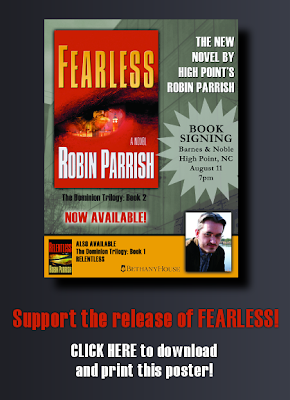 You have to love Google. Today, I went hunting for factoids about Robin Parrish and his new book Fearless. For the final day of the blog tour, I'm showing you some of the cool stuff I found.

Robin Parrish had two great ambitions in his life: to have a family, and to be a published novelist.

In March of 2005, he proposed to his future wife the same week he signed his first book contract.

Born Michael Robin Parrish on October 13, 1975, Robin's earliest writing efforts took place on a plastic, toy typewriter, and resulted in several "books" (most between 10 and 30 pages long) and even a few magazines.

By the age of thirteen, he had begun winning local writing awards and became a regular in his high school's literary magazine. In college, he garnered acclaim from his English professors and fellow students while maturing and honing his skills.

After college, he entered the writing profession through a "side door" -- the Internet. More than ten years he spent writing for various websites, including About.com, CMCentral.com, and his current project Infuze Magazine, which is a unique intersection between art and faith which he also conceived of and created.

One of his more "high concept" ideas for Infuze was to return to his love for storytelling and create a serialized tale that would play out every two weeks, telling a complete, compelling story over the course of nine months. That serialized story eventually came to the attention of several publishers, who saw it as a potential debut novel for Robin Parrish.

In 2005, Bethany House Publishers brought Robin full circle by contracting him for the rights to not only that first book -- but two sequels. A trilogy, to unfold in the consecutive summers of 2006, 2007, and 2008. One massive tale -- of which that first, original story would form only the foundational first volume of the three -- spread across three books.

Robin is the Editor in Chief and creator of Infuze Magazine. He and his wife Karen reside in High Point, North Carolina. Karen works for High Point's First Wesleyan Church, where Robin and Karen are members and Small Group leaders.

Comic Books Based on the Books? COOL!!

And, as the gameshow host says to the mystified contestand: "And that's not all!!!" 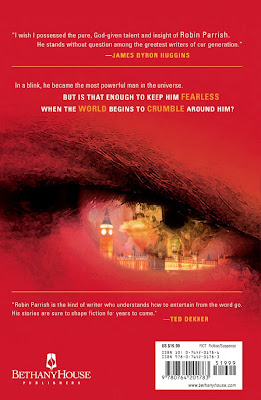 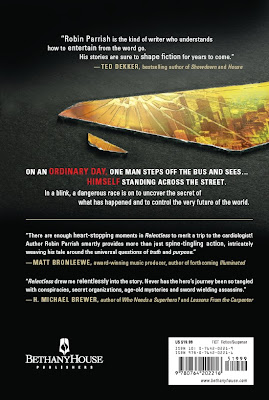 A Forum for Fans to Discuss the books!
CLICK HERE

If that hasn't convinced you that FEARLESS should
be on your TO-BE-READ Pile, you might want to
make sure you can still fog a mirror.
(And I mean that in the nicest possible way)

Posted by WayneThomasBatson at 9:20 AM 4 comments:

Hundreds of super-beings walk among earth's inhabitants. An unexplained series of natural disasters have shaken the populace to its core. Fear fills the heart of every human being. But in the darkness there is hope; the man known as Grant Borrows, whom the public has dubbed Guardian. He is heroic, powerful, and fearless. While Grant enjoys this new life, those close to him worry he may be hiding a terrible secret. A search for answers brings Grant and his friends to London, where an extraordinary discovery awaits that will challenge everything they thought they knew. With a deadly new enemy dogging his steps, Grant realizes that the world's only hope may come from unraveling the truth about himself once and for all. But what he comes face-to-face with leaves even this most powerful of men shaken with fear...

This is the introductory blurb for Parrish's marvelous SpecFaith Thriller: Fearless. It is the 2nd book in the Dominion Trilogy. Check out both books by clicking on the links below:

RELENTLESS Link
FEARLESS Link
Posted by WayneThomasBatson at 9:07 AM 12 comments:

This morning, I had the great pleasure of appearing on WRBS Radio with morning anchors: Tracey, Mike, and Dave. Wow, what a great trio to work with. They asked insightful questions and fed off of each other seamlessly. Turns out I met Dave at a booksigning in Ellicott City one time. He even brought a copy of The Final Storm for me to sign for his son. 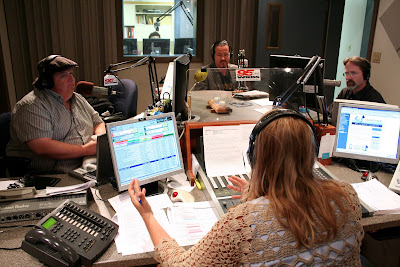 They sat me down in front of a mic and prepped me on how things would go. I noticed on the console in front of me there were three buttons: On, Off, and...Cough. Too funny. Thankfully, Tracey operated my on/off switch or who knows if I'd have ever been heard from.

WRBS is a Christian Music Station, and in the morning, they alternate music with traffic, news, and weather. This morning, they came in and out of music breaks introducing me and my books. They kept saying things like, "And when we come back, we'll continue our conversation with local author Wayne Thomas Batson, that is if you'll stay with us for a bit longer." I kept thinking, I'll stay on with you all morning if you want. LOL

Here are the links if you want to listen to the interview: 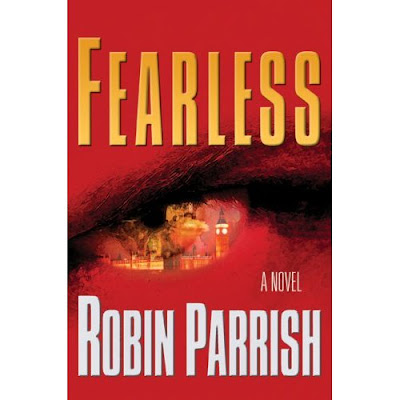