Christmas Story 2015…and an Atomic Facepalm!

Greetings, Readers! {Author salutes sheepishly} So, you've probably already noticed the discrepancy in the polling results. At the close of the poll, the votes showed the Mash Up story as 5 votes ahead.

And yet, here's Mr. Author claiming that the Cat/Anne Pirate Story won. So HOWWZZZAT work? Well, it's a simple and vexing matter of me counting chickens before they did'st hatch.

I checked the vote on Thurs and once on Friday, and the pirate story was in the lead rather comfortably. And I was very, very glad because I've already poured a ton of work into that story. And I was actually afraid because, if any of the others won, I wouldn't have time to finish by Christmas or even (like last year) New Years!

So, imagine my shock and horror when the Mash Up was victorious! So there I am, feeling much like a world-class donkey. Awwww Hee! 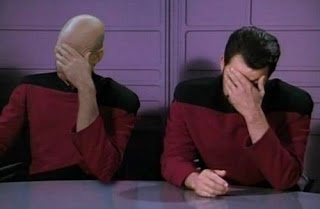 So, after much thinking, I've decided on the only course I can complete on time: Cat and Anne's new Pirate Adventure. To those hoping for the mash up, I most sincerely apologize. But, as a little concession, I am going to scatter characters from my other books throughout the pirate story. So, it will kind of become both Isle of (something) and a Mash Up.

These will be cameo appearances, so don't expect Alastair Coldhollow to swing down onto the deck to slash the story's villain. But...he might appear as a deck hand. LOL

Anyway, please forgive me for the major GOOF. Since I've already gotten a good start, I'm hoping to have the new story out by Christmas Day!