Dear Hachette,
As a reader, I'm surprised to see such a large company fighting the future and, in so doing, denying itself maximum profits. Readers don't want to pay exorbitant prices for digital property. It's one thing if you can put a book on the shelf where it becomes a part of the decor, but quite another when it's one of hundred or thousands of files on a hard drive. Amazon is fighting for lower eBook prices, and that benefits everyone. The research has been done. No matter what your profit margin, you will make less money on an ebook that costs readers $9.99 or more than you will on an ebook that costs readers $4.99 or less. Why? Volume. I have never and will never purchase an ebook for more than $5.00. 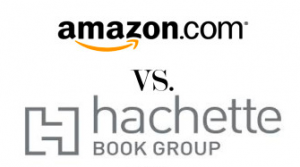 I am also a published author of 15 novels, several of them bestsellers. I've sold over half a million books, and have eight more titles under contract for the future. But I'm sick and tired of big publishing companies squeezing authors as they do. I'm making a pittance on many of my books while the publisher takes far more than the lion's share. Finally, Amazon comes along and offers authors a fair royalty rate. I'm thrilled. I can actually get paid like a professional now.
Authors certainly are NOT united against Amazon. In fact the majority of us celebrate what Amazon is trying to do for us.
Never alone.WayneThomasBatsonBestselling Author of The Door Within Trilogy,Isle of Swords, Isle of Fire, The Berinfell Prophecies, Sword in the Stars, and The Errant King, new Thriller GHOSTwww.enterthedoorwithin.blogspot.comwww.heedtheprophecies.comwww.swordinthestars.com

The preceding is a letter I wrote to Hachette book group based on the following email from Amazon.com. While I certainly do NOT support everything Amazon supports, I do support them in this fight. Legacy Publishing is simply in the wrong here.

Just ahead of World War II, there was a radical invention that shook the foundations of book publishing. It was the paperback book. This was a time when movie tickets cost 10 or 20 cents, and books cost $2.50. The new paperback cost 25 cents – it was ten times cheaper. Readers loved the paperback and millions of copies were sold in just the first year.

With it being so inexpensive and with so many more people able to afford to buy and read books, you would think the literary establishment of the day would have celebrated the invention of the paperback, yes? Nope. Instead, they dug in and circled the wagons. They believed low cost paperbacks would destroy literary culture and harm the industry (not to mention their own bank accounts). Many bookstores refused to stock them, and the early paperback publishers had to use unconventional methods of distribution – places like newsstands and drugstores. The famous author George Orwell came out publicly and said about the new paperback format, if “publishers had any sense, they would combine against them and suppress them.” Yes, George Orwell was suggesting collusion.

Well… history doesn’t repeat itself, but it does rhyme.

Fast forward to today, and it’s the e-book’s turn to be opposed by the literary establishment. Amazon and Hachette – a big US publisher and part of a $10 billion media conglomerate – are in the middle of a business dispute about e-books. We want lower e-book prices. Hachette does not. Many e-books are being released at $14.99 and even $19.99. That is unjustifiably high for an e-book. With an e-book, there’s no printing, no over-printing, no need to forecast, no returns, no lost sales due to out of stock, no warehousing costs, no transportation costs, and there is no secondary market – e-books cannot be resold as used books. E-books can and should be less expensive.

The fact is many established incumbents in the industry have taken the position that lower e-book prices will “devalue books” and hurt “Arts and Letters.” They’re wrong. Just as paperbacks did not destroy book culture despite being ten times cheaper, neither will e-books. On the contrary, paperbacks ended up rejuvenating the book industry and making it stronger. The same will happen with e-books.

Many inside the echo-chamber of the industry often draw the box too small. They think books only compete against books. But in reality, books compete against mobile games, television, movies, Facebook, blogs, free news sites and more. If we want a healthy reading culture, we have to work hard to be sure books actually are competitive against these other media types, and a big part of that is working hard to make books less expensive.

But when a thing has been done a certain way for a long time, resisting change can be a reflexive instinct, and the powerful interests of the status quo are hard to move. It was never in George Orwell’s interest to suppress paperback books – he was wrong about that.

And despite what some would have you believe, authors are not united on this issue. When the Authors Guild recently wrote on this, they titled their post: “Amazon-Hachette Debate Yields Diverse Opinions Among Authors” (the comments to this post are worth a read).  A petition started by another group of authors and aimed at Hachette, titled “Stop Fighting Low Prices and Fair Wages,” garnered over 7,600 signatures.  And there are myriad articles and posts, by authors and readers alike, supporting us in our effort to keep prices low and build a healthy reading culture. Author David Gaughran’s recent interview is another piece worth reading.

We recognize that writers reasonably want to be left out of a dispute between large companies. Some have suggested that we “just talk.” We tried that. Hachette spent three months stonewalling and only grudgingly began to even acknowledge our concerns when we took action to reduce sales of their titles in our store. Since then Amazon has made three separate offers to Hachette to take authors out of the middle. We first suggested that we (Amazon and Hachette) jointly make author royalties whole during the term of the dispute. Then we suggested that authors receive 100% of all sales of their titles until this dispute is resolved. Then we suggested that we would return to normal business operations if Amazon and Hachette’s normal share of revenue went to a literacy charity. But Hachette, and their parent company Lagardere, have quickly and repeatedly dismissed these offers even though e-books represent 1% of their revenues and they could easily agree to do so. They believe they get leverage from keeping their authors in the middle.

We will never give up our fight for reasonable e-book prices. We know making books more affordable is good for book culture. We’d like your help. Please email Hachette and copy us.

Please consider including these points:

- We have noted your illegal collusion. Please stop working so hard to overcharge for ebooks. They can and should be less expensive.
- Lowering e-book prices will help – not hurt – the reading culture, just like paperbacks did.
- Stop using your authors as leverage and accept one of Amazon’s offers to take them out of the middle.
- Especially if you’re an author yourself: Remind them that authors are not united on this issue.

Thanks for your support.

P.S. You can also find this letter at www.readersunited.com
Posted by WayneThomasBatson at 12:51 AM 1 comment:

Good friend Harry in China sends a long this photographic proof that the Spider King is alive and doing his dirty work in a shoe store. 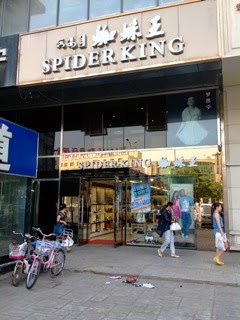 Beware "he who lurks among the shoes!"

Thanks for the pic, Harry! Hilarious!
Posted by WayneThomasBatson at 12:19 PM 2 comments: