The Full Door Within Trilogy Video

I've now loaded the full 7 minute version of The Door Within Trilogy Promotional Video that I made last spring. I use it at signings and especially at school visits. The software I used: Bryce 3D for the still fantasy scenes, iMovieHD for the actual movie, and LiveType for the titling. The short version on the right had an issue being half cut off on some browsers, so I put this full version at the bottom. You'll find it beneath the posts. Hope you like it.
Posted by WayneThomasBatson at 6:20 PM 18 comments:

The Door Within Trilogy Trailer!

Book Trailers seem to be gaining popularity. A Barnes and Noble CRM once told me that most big chain bookstores will be installing large, flatscreen TVs that do nothing but run loops of book trailers all day long!

I've been a big fan of Apple's iMovie for quite some time. It has some remarkable applications for authors--esp. for the aforementioned book trailers. The way iMovie integrates with other software: LiveType (for titling), Soundtrack and iTunes (for music), and iPhoto (for still shots and artwork) is nothing short of amazing. I spent most of last spring creating a full length Door Within video trailer. I took the video with me to the International Christian Retailers Show and we displayed it on TVs on the floor while I did signing. Surprising me completely, Tommy Nelson liked it enough to offer to put it on some of their DVDs.

They had their most excellent video guy trim and revise to make it a 90 sec. spot. This is what you see here on the right. And now, with the addition of sites like YouTube and MySpace, you have marvelous forums to promote your books.

Let me know what you think of the trailer.

Then, as a side issue--what do you all think about MySpace? It has some awful stuff on it--racy ads and such. And there have been far too many stories about predators lurking on such sites or teens using it in less than savory ways.

But…that said, it offers some amazing possibilities to reach people with your books. Like the Internet in general, it seems like a vessel that can be used for good or ill. What do you think?
Posted by WayneThomasBatson at 7:40 PM 8 comments: 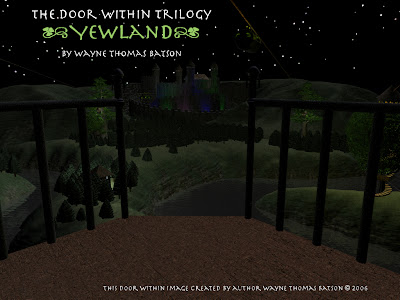 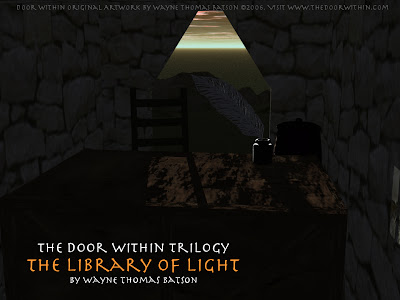 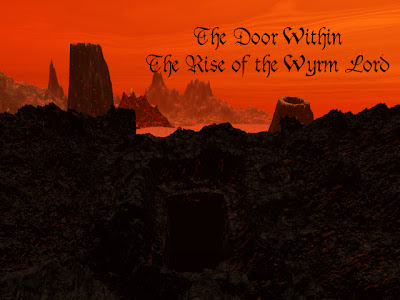 In preparation for the CSFF Blog Tour, here are two more Door Within Trilogy images you can right click download for your site or personal computer.

The Christian Science Fiction and Fantasy Blog Tour (CSFF)
will feature The Door Within Trilogy on January 22, 23, 24th!

This means that over 60 Blogs will be featuring all things Door Within:

• Professional Reviews of The Door Within,
Rise of the Wyrm Lord, and The Final Storm!

• Interviews and Guest Blogging from the author,
Wayne Thomas Batson<---Click for Cheesey Author Photo! • Behind the Scenes looks at all three books--including pages from the earliest manuscripts! • Free Downloadable Desktop Art for The Door Within Books!

• A Surprise Announcement About the Lost Scrolls
of The Realm (Have they been found at last?)

Not only can you enjoy Door Within content
that's available no where else, but you can comment, ask questions, and
Chat with the Author and other Door Within fans!

Hope to see you there.

The Best Sort of Surgery

Since finishing the Isle of Swords manuscript on Dec. 31st, I've received and completed two additional sets of edits. As mentioned in the previous post, I've worked with the same editor, a wonderful lady named June, for all of my published books. She's dynamite, and I've learned a metric ton from her.

But…since I somehow have a knack for overshooting my word count by about 10,000-20,000 words, there has been a lot of cutting. For those wondering what I mean by "overshooting my word count," I don't know if all publishers work this way, but for my books, the publisher has predetermined a word count range. I believe it has something to do with typesetting and the number of signatures that will eventually make up the book. Seems like it would make more sense to just have the author write the book and THEN figure out the signatures and such, but oh, well! lol

Being so far over word count means I needed to cut a lot of content from the books. The Final Storm was the hardest b/c I needed to cut almost 20,000 words. But a funny thing happens when you start cutting: you begin to ask the most important question a writer can ask: "Why is this scene in my book?"

Seriously, you need to be cold, hard, and honest about this. The wonderful, clever, witty, yummy scene that you've so colorfully drawn up…uh, does it really belong? If it was missing, would anyone really notice?

When I cut (or my editor cuts) it hurts--A LOT, but it really is the best sort of surgery. Rarely have I been disappointed with the end result of a chapter or scene after cuts. Usually, the scene ends up much stronger, much more powerful or poignant.

For The Door Within, my editors made (read: strongly suggested, and being newly signed, I didn't argue) me cut the first three chapters! Ouch. But in the end, the opening chapters are much more captivating--they hook the reader unlike my original plan.

This is all not to say that I don't disagree with my editors. We go at it via email all the time. But the struggle helps me to define what I really wanted in the story in the first place.

The moral to this tome: send your editor some love; their surgery may save your novel.
Posted by WayneThomasBatson at 2:05 AM 6 comments: