Warning: Do NOT Start Reading The Door Within

I hate to sound like Spiderwick or Series of Unfortunate Events, but as the author of The Door Within Trilogy, I feel obligated to warn you NOT to start reading my books…that is if you have anything meaningful to do in the next day or so.

If you ignore my warning and do immerse yourself in my harrowing fantasy adventure that slashes the boundaries of two worlds and draws you into the unexpected, I cannot be held responsible for the consequences.

At the very least, you may find yourself doing a lot of activities one-handed. Take young Sophie from NY in the pictures below. Her mom snapped these candid shots of Sophie as she goes about her morning routine. 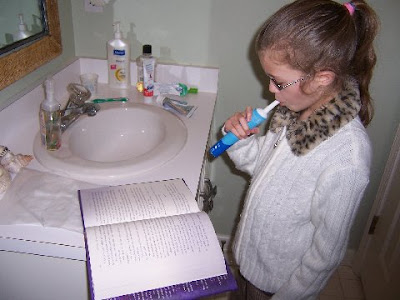 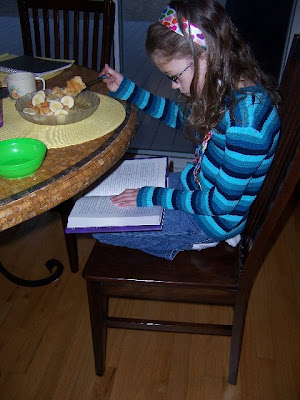 Can you say, "Priceless?"
Posted by WayneThomasBatson at 8:23 AM 32 comments:

Labels: Fans, Readers, The Door Within

The Banshee: It is not good for man to be alone.

Mission accomplished. Thank you for all who prayed that this past weekend in Scranton would be everything it needed to be…for it surely was. Prior to going, I hoped it would be: relaxing, inspiring, productive, fun, faith-building, silly, and memorable. It was all of the above, and I couldn't be more thrilled with the results.

There's something about hitting the road, the adventure, maybe--something that just absolutely stokes my creative fires. The whole way there I cranked up the prog. metal CDs: Dream Theater "Images and Words" first and then a new Nightwish offering called Dark Passion Play. There's me cruising through the mountains with crunchy guitars blasting. Ah, the memories are so fun.

Pulling into Scranton, I pumped my fists and basically hooted like an idiot. I could hardly get to our room fast enough. In the end, I wrote about 2,000 words (about a chapter and a half), but also outlined ideas for tons of others to come. 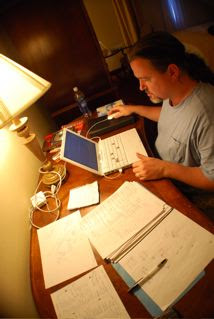 Christopher Hopper (shown below) who writes A LOT faster than I do, probably polished off somewhere around 40,000. JK. Still, he was writing like a crazy man. There were so many times when one of us got stuck and the other came through with something righteously cool. And just a word or two about Christopher Hopper: he is a hero of the faith (not to be put up on a pedestal--his balance isn't very good.) But seriously, whenever I'm around him, my faith strengthens. Jesus just billows out of the guy. I've known him for two years now, and it feels like we have a twenty year history. It's a God thing. 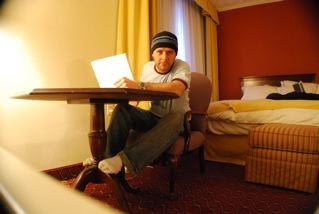 In the late part of the evenings, when we put out the light, the strangest thing happened. I'm in my bed on one side of the room. CH in his bed on the other side. And the two of us are cracking jokes and laughing our cumulative rears off. I mean, little kids on a sleep over kind of laughter. Guffawing! Belly laughs that make you feel like you've had an ab workout. We were literally crying from laughing so hard. I can't tell you everything we laughed about, but let's just say much of the hilarity came from a certain gnome who happens to be a barrister and could use a case of Beano. Nuff said. 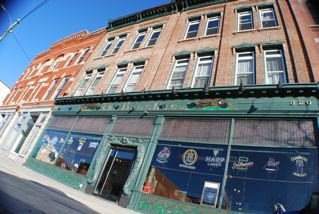 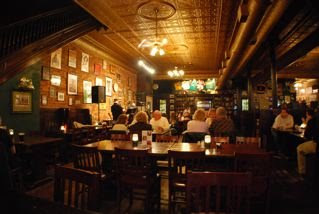 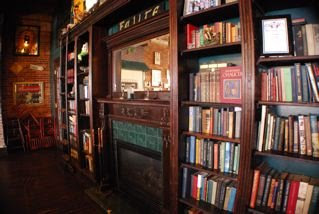 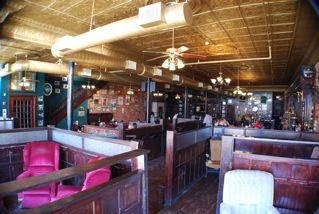 Between writing sprints, Sir Christopher and I frequented our favorite home away from home, the magnificent Banshee Pub. As you can see from the pictures, the place is just awesome: dark wood, black wrought iron, brick, gilded ceilings--what an inspiring place to hang. Christopher made a photo-plaque for us to sign and dedicate to the Banshee. Little did we know that the kind folks there would hang it on the wall. And there it will be for years to come. COOLNESS. 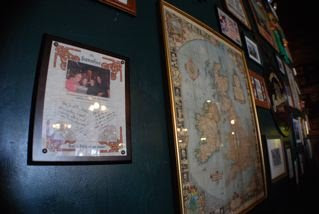 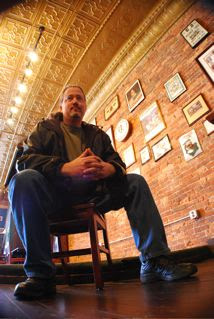 While at the Banshee, we were blessed to again be joined by the pub owners, family, and friends. See pic below (me, Chuck, Melody, Kathleen, CH). I had the blessing of being able to talk for quite a while with Chuck. He is one amazing guy. He's the distinguished older gent in the pic. But the guy runs the Ironman! I could barely run out of the pub without being out of breath, but seriously, a triathalon??? 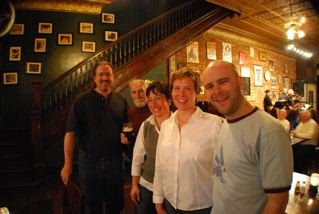 The more Chuck and I spoke, the more I was overwhelmed with the notion of how precious people are. Everyone has a story to tell if we'll listen. Chuck told me he thought sometimes of being a writer. He told me he'd worked on some short memoir kind of writings. I hope he pursues it. It's never too late.

Chuck and his family are people who value a good conversation. And I think, rightly so. You know what "pub" stands for? It stands for public house. It's a place where people can go to be around other people. Remember Cheers? Sometimes you want to go, where everybody knows your name..." 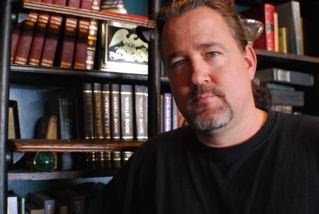 God said, "It is not good for man to be alone." Now I know He fixed that by giving Adam his beloved Eve. But it seems to me, take away all the distractions, all the noise, and what really matters? I think it's relationships. First with God, but then with people. Let this sink into your mind for a moment: what would all your accomplishments, dreams, thoughts, hopes, work, play matter if you had no one to share them with?

Relationships matter. The people in your life matter. More and more, I'm convinced and convicted that I need to cultivate all the relationships God has blessed me with. And what does it take? Time. A listening ear. A willingness to share. Is there someone you need to "hang" with a little more? Is there someone who might need to talk? Is there an old friend you've neglected for too long?

I used to be a pretty independent person. I used to do all kinds of things all by myself. It was not uncommon for me to consume 6 hours golfing all alone. Now, I wouldn't even dream of doing that. Not that we all don't need some alone time. Not at all. But still, we can sometimes get into ruts of fading out of people's lives. We become like ringwraiths, shadows not in this world fully.

We need to know others and be known. I think that's why the adolescent exclusion and teasing is such a painful thing for so many. If you're not on the inside crowd, nothing feels right with the world. If you're reading this, and you're kind of an outcast, I want you to know that Jesus LOVES you. He spent much of His time on earth "hanging" with those the "in" crowd had pushed aside or branded as "lesser." You are a treasure to God. With Him, you are truly never alone.

And something more for those who long for relationships but seem on the outside looking in: what if God allowed you to experience this so that you could reach out to others who are going through the same thing? It is not good for man to be alone. Go change that for someone else. Don't let anyone be alone. Introduce the One who can be with you forever. 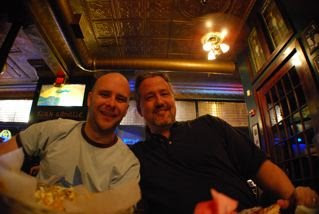 To close: go ring someone's doorbell, call someone, chat, IM, email, open a door--find someone and, to quote the Banshee's wonderful sage Chuck Rogers, say, "Let's go have us a conversation."
Posted by WayneThomasBatson at 8:17 PM 15 comments: