Kindle the Fires of Hatred


Kindle the Fires of Hatred

That's not a phrase you hear Christians say very often.

Not often enough as far as I'm concerned.

I just got back from the local fire hall where our local Relay for Life is being held. The Relay is an American Cancer Society event that takes place in virtually every city in the country. People get sponsors and walk a track all night long to raise money to search for a cure for cancer.

Just a few years ago, my family watched a very good friend of ours slowly succumb to brain cancer. He left behind a wide and three young children. Since then, his surviving family, my family, and many others have participated in the Relay.

One of the events that takes place is that people light luminaries for all those loved ones who have died or struggled against cancer. The little white paper bags containing little white candles line the perimeter of the track we walk. Well tonight, we lit luminaries for our friend who is now with the Lord. And we thought of all those we love who have fought cancer: an aunt, my parents, the list was long. And as I let my eye wander around the track, following the endless line of little white paper bags illuminated by little white candles, I became angry. When my small children and our friend's children wept by the candlebag our our friend, I became incensed. Hatred kindled inside of me.

Now, don't misunderstand me. I know all those who have died because of cancer did not get cancer because they sinned. I understand the Biblical account of Jesus where his disciples saw a sick man and wondered who sinned that he should be so sick--the sick man or his parents? Jesus knew better and responded that it was so that God's glory could be shown when Jesus healed the man.

I have sinned far more than thousands who have died from cancer. This I know, and yet, I go on living. But one thing is certain: if it were not for all sin, there would be no cancer. The world would not be fallen, stained, and cursed. I don't blame Adam or Eve. Had it been me, I'd have probably eaten a bushel of apples and passed them out to all my friends. But sin happened. They sinned. I have sinned. All have sinned. And look at all the suffering in the world.

I was convicted that I contribute all too often to the misery of the world. Every time I sin, it's like feeding a monstrous force of sorrow, pain, and death. And I know, some sins are pervasive and terribly difficult to shake. But there are others sins that we all know we can beat--with God's strength in us, we know we can. Little white lies, rationalizing, manipulations disguised, selfishness dressed up to look like something better...the list goes on. We Christ followers are called to be like Jesus--putting off the old self, HATING SIN in all of its forms.

So I issue a call to all who might read this: Kindle the fires of hatred--hatred of sin. And as much as you can, with all your might, with all God's power in you--be holy. Say to the enemy, "In the name of Jesus Christ, GET OFF ME!! I am free to choose not to sin!" 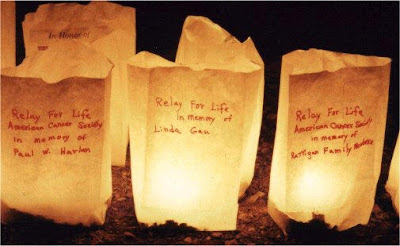 Posted by WayneThomasBatson at 9:26 PM

Well said m'lord!
Our church does the Relay for Life as well.

I'm finally back from Cali and was so excited to see a contest winner! I can't wait to see the next one. I don't envy the "selection team." :)

How late is too late to enter the last two Tecniques? (I noticed that I only submit one for each.)

I've reinjured my left wrist and am forced to hen-peck at the keyboard. Oh well - it's just a new adventure, right?

Too often we have such a flippant view of sin. We forget the cost. We forget how much the Savior paid.

Having a family that has walked too many times through cancer, I can say this, everything you do counts when someone is going through cancer. Cards, phone calls. Prayer. Meals. Everything. Events and rallys are great, but if you really want to make a difference you have to walk through the pain with us. Hurts like you can't imagine, and often there aren't happy ending this side of eternity, but the number one thing cancer patients feel at some point or another is alone. Walk with us through the mud and the muck and the blood, and hate the sin and hate the disease and hate death. But be with us, it's horrible to be alone.

okay compleatly random but Mr. Batson did you know that BTW is your initials backwards lol its quite humors, or maybe im a bit slap happy ,at 1 in the morning, either way i thought i would state the obvious. ^_^

Its my pleasure Amy. -lol- I just felt a need to state the obvious.

Stating the obvious can sometimes mean that we're actually bringing new light to something we're all used to seeing. Isn't that our job as writers? :)

I just wanted to let you know that this entry really spoke to me. My mom died of leukemia in January of this year and it has been the hardest thing I have ever had to go through. I have felt that feeling of hatred of sin & death. It's all because of the fall, which as you said, we are to blame as well. In the natural realm I have changed many things in my life to help fight cancer, after reading your entry I know I can also do something in the spiritual realm....I can do more for God and resist my sinful nature even more so...this way I stop contributing to the fires of sin! Thank you so much for posting this! It was really encouraged me! God bless!

I am sorry for your loss. And the nearness of it must make it extraordinarily hard to share that news in this public way. Thank you for entrusting us here with a part of your life.

You have rekindled the desire to be holy in me. In just a few weeks, I've noticed myself slipping into old habits and thought patterns...funny--and sad--how easy it is for fervor to fade. Sin is all too comfortable and the enemy of our souls does all that he can to grease the path back to evil. But God is able to do more than our enemy--and it isn't even close.

Krystal, I pray for you and all you will reach.