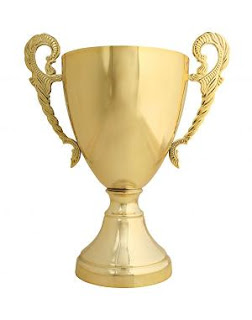 Tribe Building 2 Champion
Before announcing the winner (you didn't think I was going to come right out and just say it, did you?), I feel a bit of preface is in order. During one span of the contest, the Amazon Blitz, I inadvertently created a scoring glitch that compromised the true spirit of the contest. It left Tribes in a state of apprehension and me in quite a pickle. For to double back on what I had originally permitted feels much like not honoring my word, while allowing such a gimmicky technique undermines all the hard won points on both tribes. So in the end, after much thought and a convo with Christopher Hopper, we've made a decision. And it is time to announce the winner of the Venom and Song Tribe Building Contest.


And the winner is...
(You'll have to use your mouse and highlight the space below)
Tribe
Swiftstorm
Congrats to both teams. We will be discussing prizes soon!
Posted by WayneThomasBatson at 6:41 PM

Thanks so much for holding this contest Sir Batson! I had a magnificent time with the Elves. :D

Great job to all involved!

WTB, could you email or something your reasons for changing your mind? You'll have to keep in mind, several of the tribe is very upset on account of this.

Jake you don't want to know what our real total was...

I wouldn't have minded losing but this is the sourest loss I have ever had.

Wow I'm glad I didn't have to make that decision. Congrats to both tribes of elves who worked so hard.

I wish I had been able to join this....but maybe next time...
*gasps* Sir Batson...there will be a next time right?? Oh there has got to be!!!!!
And congrats to everyone!!

Congrats to both tribes, it was a hard fought war ;)

Wow, very political choice, considering so many kids spent hours, days, even weeks working on that.

Congrats to the winning tribe, and DOUBLE congrats (as you guys need a little lifting up right now) to the losing tribe/s.

Congrats, all! The main thing, remember, is that you helped uplift a great book and two great authors, and all of you can hold your heads high.

You seem to have forgotten something. In the rules of tribes in the 2,000 place it says something along the lines of, 'Make a video for one of our books. The best one will get an extra 5,000'. We wouldn't care about the 5,000 since tribes are done, but can you still pick one?

Also---I'm really glad I didn't have to make your choice. I can't imagine what it would have been like to be you.

Congratulations to all the Silvertree Members, well done.

Congratulations to all my SS buds. Love ya ;)

Anon, I haven't seen any of the videos for this Tribebuilding series. I'd be happy to judge them, but I'll need some links.

Maybe next time, Silvertree. Mr. Batson, can you release the total scores of each tribe, please?

Congratulations to everyone who was in the contest!

Good job to everyone who participated --I haven't lurked the forums in forever, so I don't know what went on, but still, great job to you who participated. =) I was thinking of joining, but I don't think I'd be a productive or helpful member in a team ... I'd just take up space, 'cause I'm really busy with school and my job. =( Remember, just like Robert said, you helped give an awesome author more publicity and I'm sure you guys had fun while doing it. =)

This sounds cool! I wish I could have done it.