Isle of Stars is HERE!


The wedding of Griffin "Cat" Thorne and Anne Ross is on! Or is it? Captain Tobias Dredd, the infamous pirate "Toby Scratch," has been scouring the South Pacific, searching for Father Carroll, a member of the clandestine holy warriors known only as The Brethren. When Dredd's ship, The Red Corsair, levels a Brethren monastery, Declan Ross and the crew of The Robert Bruce are called upon to pursue Father Carroll and maintain his safety at all costs. The hunt for Father Carroll is on between Ross and Dredd. At stake: the lives of everyone involved and a treasure worth three times the world. For Father Carroll alone knows the location of The Isle of Stars, and he knows its secrets. 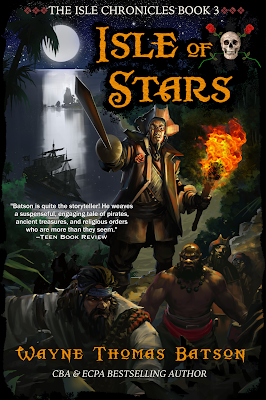 Isle of Stars is the long-awaited sequel to Isle of Swords and Isle of Fire. But it's more besides. Each Christmas season, I post a poll on my writing blog asking readers to vote on a "Gift Story." I give readers several options of books I'm willing to write, and the story concept with the most votes wins. This year, there was a bit of a glitch in the Matrix. Not a tie, exactly, but two stories needed to win. And so, what you have in Isle of Stars is a legit sequel but also a bit of a mash up with cameos of favorite characters from other Batson books. It's honestly the strangest story I've written. I hope readers will enjoy the adventure and also can't wait to see if they can find all the cameos, references, winks, and nods that I've included in the story.

HOW TO GET IT:


LINK TO ISLE OF STARS


In addition, I will be making Isle of Stars available in Paperback. Not sure about pricing yet. It's between 35K and 40K words, so should be pretty cheap as far as paperbacks go. Also, Amazon does a price match bonus where if you buy one version, you get the other version for next to nothing.


Thank you, dear readers, for your patience. This "Christmas Gift" story is more like an "Easter Gift" story! Hope you enjoy sailing once more with Declan Ross, Cat, and Anne!
Posted by WayneThomasBatson at 10:25 PM

Yes! Awesomeness- thank you, Sir Batson!
Now I need to reread the first two in the series, to refresh my memory and all . . . :)

My copious amount of excitement just caused my brain to explode. This news is so awesome that it merits unlimited exclamation points!!!! Cat and Anne are back!!! *throws confetti in the air* Thanks for making my week, Mr. Batson!

Thanks so much, Mr. Batson. I'm getting the story now. I will also get it when it is available in paperback.

Excellent! Many thanks, Mr. Batson! Merry Belated Christmas, and a Happy Easter to you! :D

I remember reading your books whenever I would go camping and was unable to put them down till I finished. I can't pick favorites, but I so enjoyed your Isle series that after seeing this post, I squealed and shared with the friends who inspired me to pick up your books to begin with. You were the one to inspire me to write, so thank-you :) You are very much my inspiration!

Mr. Batson,
Oh my goodness, thank you so much! I'm absolutely thrilled to read it!! I'm sure it's going to be wonderful, just as the rest of your books are. Again, thank you!

Would love this in ePub - Nook format!