One of those days...

Speaking engagements and book signings are a blast most of the time. I absolutely LOVE having an opportunity to read my work to kids {and big kids, lol}. I break into English accents and immerse myself in the characters and just generally have a blast! The pic below shows me at a local elementary school. I read snippets from The Door Within and Rise of the Wyrm Lord and made the kids jump a few times. Heh, heh, heh. A great response from all involved. ;-) Most book-related events have gone that way for me, and believe me, I'm thankful. But... 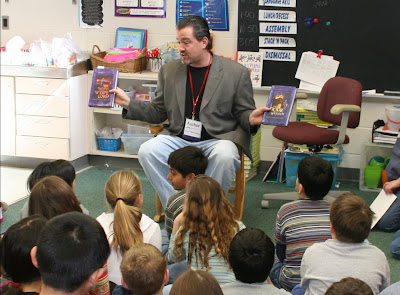 There are times when things don't really go as planned. Take this last Friday for instance. I was at a middle school and speaking to about 250 sixth graders. This is, by the way, the grade I teach at my school, Folly Quarter. So I went there thinking, piece of cake. {He rolls eyes at his own tragic hubris}

So, thinking the event starts at 1:30, I get to the school at 12:50 to set up. I walk in and I'm met at the door by one of the coordinating teachers. She rather cryptically says, "Whew, we were worried you might not make it." Puzzled, I smile and make small talk. It was nice for them to meet me there, I thought. I have lots of medieval/fantasy props that I set up, including a forty foot faux castle wall made of ribbed cardboard.

Inside, several teachers are flying around, helping me set up, shouting out questions like "Where does the candelabra go?" and "What should I do with the dragon hourglass?" Scratching my head and feeling a bit of ice in the bottom of my stomach, I clarify, "We start at 1:30…right?"

And so began a comedy of errors. Allow me to list the things that went wrong. Now remember, this is all in one (one hour) performance:

1. My opening English accent joke (that usually gets a roar), goes right over their heads. Whoosh. I deliver the punchline and get…chirp, chirp, chirp.

2. I usually pick a kid to hit the space bar on my laptop during the powerpoint portion of my show. Usually this works out well…but not this time. The kid I chose was way too busy talking to a friend to hit the slides when I asked, so half the show I'd look up and see I was 1-2 slides behind. DOH!

3. I mic my sound system for the Door Within Promo video, but it's an old school. So when the kickin' guitar riffs and thumping bass beat come in--it sounds like a cross between a terrorist attack and a giant who had a bean and beef burrito about an hour back.

4. Half way through my sneak preview reading of Falon's Stair, the forty foot faux castle wall unhooks itself from the stage and begins to do its impression of the Berlin Wall. Down it went. But on with the show.

5. At some point during the performance (I think after the first 10 minutes), several of the sixth grade teachers decide that they should have some extra planning time. So they leave their kids and the auditorium. Now 6th graders are wonderful kids--and this school has a really nice bunch. Buuuutttt...leave them on their own? So it has now become me and the six or seven teachers remaining to handle crowd control. That puts it at about 31 kids for every adult. Hmmm...it was a good thing I brought my broadsword.

6. And then, the worst of it all {for me} came during the signing portion. A sixth grader comes up. I glance, see the long hair, the earring, the smile. "Greetings M'lady," I say. "What can I do for you."
"Uh…I'm a guy," he replies. Immediately, I break into damage control. "I'm SO sorry. Mannn, see I have long hair too. If it wasn't for the goatee, people'd make the same mistake with me. Blah, blah, blah." OHHHHggghhhh. I'm an idiot. The kid is like, "No problem. I'm not worried about it." But I know…I've just crushed this young man's spirit. I quickly scan the auditorium for an escape route, a rock to hide under, or a grenade launcher to eat. No such luck. I must endure.

And so ends one of those days...

What are your experiences at signings? For authors--ever had a bad one? Readers: what do you like not like about them? Anyone you've seen who was good?
Posted by WayneThomasBatson at 6:56 PM

So sorry Mr. B! That was crazy. Although, I can't say that I wouldn't enjoy having those problems, because that would mean I was published. :)

I've actually never been to a book signing. Sorry, but you've never made it to the my neck of the woods (literally woods - being that I'm in Washington state) and I only have a few author's I'd bother to go see.

Ah, Lord Batson besieged by malfunctioning props, deserting soldiers, and outnumbered to boot. What a day.

I'm sure that youngblood's laughed off your mistake, and it sounds like you repaired the damage.

Oh gosh. Good thing for broadswords :)
I wish you could come to our homeschool group! Though there's only a handful of us. I'm sure Emily and I (esp.!) would love to get a chance to meet you lol.
In the meantime, you should threaten those 'deserter' teachers with your sword!!!

No experiences to share, just a few (well-hidden) snickers. God bless you, Wayne, for being open here. Life really is NOT always all it's cracked up to be, is it? (Still cracking up...)

You must admit, it made for a great story.

Poor guy, days like those nearly bring me to tears by the end.

Every signing I have been to, and I've been to quite a few, has been a blast, and it's been a blast because of the interaction with the author.

When an author takes the time to make the fans feel welcome, makes them feel like they are really a part of the story and the fun, and takes the time to invite the audience into the realm they have created it makes all the difference in the world. I can say that not only because of the signings I've attended, but also because of the ones that I have staged and the feedback I have received from those signings.

I am honored to work with authors that are both humble and fan-focused and it makes all the difference, I have heard horror stories from other people that have staged for other authors and when ego and self-importance get into the mix it makes the whole event fall flat.

As I said, most public events go MUCH better than this one. But it was funny how so many things went wrong at once.

And Val, yes, I believe the world is NOT all it was cracked up to be.

I think Murphy's Law was another result of The Fall. LOL

Chalk it up to life experiences that make great book content :)

Thanks for letting us know what to look forward to,lol.